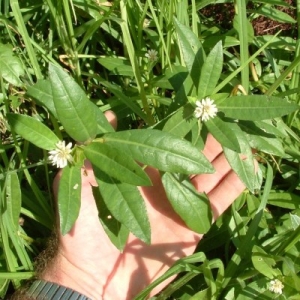 CIRCUS ELEPHANTS are believed to have been indirectly responsible for a large outbreak near Hamilton of the notorious pest plant alligator weed which can quickly take over pasture.

The unusual story is being highlighted by the Waikato Regional Council at the start of Biosecurity Month which begins today.

"Alligator weed is a dangerous pest plant which we're trying to keep out of the Waikato because it can spread really quickly, taking over pasture, crowding out native plants and choking waterways, hurting both the economy and the environment," said pest management committee chair Laurie Burdett.

"This case involving elephants shows just how careful and vigilant people have to be to help keep alligator weed out."

The 4ha outbreak of alligator weed on the outskirts of the city was found in April this year by a spray contractor. The contractor had ironically been to an alligator weed identification workshop run by the council the week before.

During discussions with the landowner about the find, council biosecurity staff learnt from him that the alligator weed started sprouting after a load of elephant dung was purchased as a fertiliser from a circus that visited Hamilton in 2007.

Subsequent checks uncovered the suggestion that about 60% of what elephants eat is excreted virtually untouched. Alligator weed is fairly common in Northland and often turns up in cheap hay or silage from there, and it was clearly possible the elephants had consumed such feed.

The idea that the alligator weed had come from the dung was further firmed up when alligator weed was found in the spot where a neighbour had used some of the dung in their vegetable garden, and on a lawn where the dung had been placed before going on the garden.

Subsequently, historic circus sites across Hamilton have been checked for alligator weed with nothing found so far. Still people are being encouraged to contact the council if they have used elephant dung fertiliser in recent years.

Since alligator weed is a "total control pest plant" to be eradicated anywhere in the region, the council has begun work to remove it from the site on the outskirts of Hamilton, with this work expected to carry on for a number of years as the weed is fast growing and notoriously difficult to eradicate.

Because of the risk of accidental spread, people are encouraged not to try to control alligator weed themselves if they discover it. Instead they are urged to call 0800 BIOSECURITY (0800 246 732) and let the council handle it.

Alligator weed is a low-growing, non-woody perennial. Its leaves are generally arranged in opposite pairs or whorls, spaced at intervals along hollow horizontal stems. Stem and leaf sizes vary greatly. They can be very compact when the weed is in lawns or grazed pasture but much larger when growing in water.