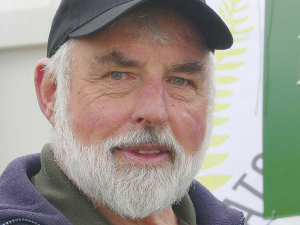 North Canterbury Deerstalkers member Andy Gillies on the Deer Association stand at the 2019 NZ Agricultural Show, aimed at alerting farmers to arms-control legislation which they say will unwittingly make criminals of many.

The association, along with the Council Of Licensed Firearms Owners (COLFO) and other groups, put up a stall at the recent NZ Agricultural Show in Christchurch, saying it’s not just “military-style” automatic weapons affected by the Government’s buyback scheme.

They say farmers who have legally held firearms for years on farm may effectively become criminals when the buyback scheme ends on December 20.

When Rural News dropped by early on the first day the three-day show, they said they had already spoken to a number of “older, not computer-literate” firearm-owning farmers with “no clue” about the reach of the new rules.

“If you have a shotgun with a seven-round magazine, it has to be five rounds or it’s prohibited,” said Brabbs.

Some weapons could be modified by a gunsmith to make them comply. But if the local gunsmith already has five years work in the queue, owners will be in breach when the buyback scheme ends, he said.

Andy Gillies, a member of the Deerstalkers Association and other firearms clubs, was helping man the stall at the show. He described the buyback scheme as a “confiscation”.

“Because it’s not a buyback,” Gillies told Rural News. “To say it’s a buyback implies the [police] own them in the first place.”

Among other proposed rules is a return to the licensing of individual firearms.

“We used to have registration for individual firearms. The police threw it out because it just didn’t work,” Brabbs said.

Another proposal is that all gun clubs and shooting ranges would have to be certified, which Brabbs claimed could catch out farmers having their mates round on a Sunday afternoon.
“If they put up a target in the back paddock and have half a dozen people come round, that’s suddenly a rifle range,” he told Rural News. “They’re in breach if that’s not certified.”

Brabbs said the Royal Commission set up after the March 15 shooting was not due to report until after the Arms Act amendments have been “rushed” through Parliament.

“So they are amending things. They’ve got no idea what the Royal Commission is going to say are the actual important issues.”

COLFO spokeswoman Nicole McKee said the ban on semi-automatic centrefire rifles – except for pest control operators who qualify for a special endorsement – was already having an effect on pest numbers on South Island farms.

She says farmers could get together with their mates for a weekend shoot, but single-shot weapons could not give the same kill rate as semi-automatics.

“Farmers are using bolt-action firearms and they’re not getting the quick follow-up shot,” she told Rural News. “The animals are dispersing and very few of them are being euthanised at the same rate.”

McKee said they were already hearing of increased erosion, crops starting to be destroyed and pigs getting at newborn lambs.

She had also heard of farmers being denied the endorsement that would allow them to continue to use centrefire semis, because they could not say that at least 80% of their business was pest control.

Hunters to help out

The Deerstalkers Association is promoting a new ‘Farmer Assist’ programme where farmers who need help to tackle a pest problem can link up with approved hunters to do the job.

The scheme aims to provide farmers with a professional-standard service for no fee.

It runs through an online board where farmers can post details of a proposed job. Accredited hunters can register their interest and the farmer then gets to choose who he engages.

DA members wanting to take part have to commit to the programme’s safety, animal welfare and ethical hunting requirements, and undergo a competency assessment.

DA says the introduction of the programme was staggered across the country to ensure a substantial resource base of qualified members able to cover any farmer request, but it is now operational everywhere.

Ian Brabbs said the scheme means that farmers can decide who gets onto their property. The approved hunters will also know that anyone else they see hunting there would be poachers who need to be reported.