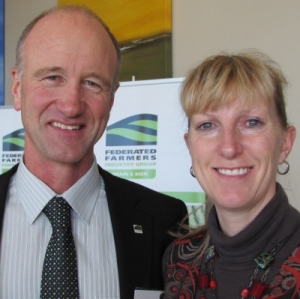 Federated Farmers' annual conference kicks off in Ashburton today and runs until Friday.

President Bruce Wills says precision agriculture and the red meat sector's future are likely to dominate in industry group annual meetings. These are dairy, meat and fibre and grain and seed.

"We look forward to hearing from our colleagues at Meat Industry Excellence, as well as from industry experts, leaders and insiders," he says.

"This will also feature one of the first talks by New Zealand's Special Agriculture Trade Envoy, Mike Petersen, since his confirmation in the role.

"On Thursday afternoon our Plenary Day kicks-off and this is about generating new thinking and ideas. We are using external panellists to get discussion flowing on Local Government's Future; Water Partnerships for Progress and Rural New Zealand & Agriculture with the Next Generation."

The annual awards will be held on Thursday evening.

"Here we will announce our Agri-Personality and Allflex Agri Businessperson for 2013. This night is also the only opportunity where all of agriculture's major award winners come together under the same roof. It is a galaxy of farming talent."

The federation's formal business day takes place on Friday. This will also feature a focus on adverse events and Federated Farmers role in them. "Somewhat timely given recent snow and of course, the 2013 drought," says Wills.