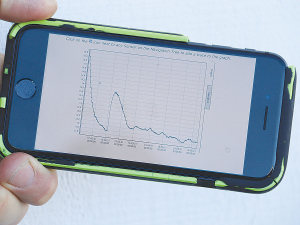 The difference in 2021 is that there are slightly higher pasture covers and more options available to them – such as irrigation and a better supply of supplements, but it’s still not easy.

On his iPhone is a graph showing declining soil moisture levels from Jan to now. They have a careful feed plan and drought strategy in place to see them though the winter.

“We are running about 15% less stock units than we normally would. We are being very cautious about their feed intakes and we are trying to build cover or hold cover until it does rain,” Connor told Rural News.

“We are getting ready to start hard feeding. At the moment, we are working on a 60 day rotation and feeding out supplements. But if we don’t get rain by the end of this month, we will go to about a 200 day rotation so the stock will only get a small strip of grass and most of their feed will have to come off the tractor.”

The Connor brothers carry about 600 tonnes of grass silage, 300 tonnes of maize silage and around 500 big rounds of hay. Last year, they spent around $200,000 on supplements (i.e. the combined cost of making hay and silage and buying in) and this year it will be around the $160,000 mark. They will also use a small amount of PKE to keep some of their weaners ticking over and save moving them to another farm with better quality pastures.

Mike Connor is a numbers and data man and after completing his degree at Lincoln University he spent time as a farm consultant and rural banker.

This, he says, gave him a good insight to what was happening on farms, and helps frame his own management strategy to deal with adverse events – such as the drought.

,p>“The fat in the system is less than it used to be. Historically, on this class of country you would be running eight stock units per hectare as opposed to twelve now,” he explains. “So the leeway then was greater because the animals you carried through a period had more fat on their backs and there would be rough feed about that could be used as a buffer. Now days, every blade of grass is accounted for, so unless you are carrying supplement and prepared to be dynamic you can get into trouble real fast.”

Mike Connor says some people on farms will be struggling to deal with the drought and people need help and someone to talk over the issues they are facing.

He says last year there was a great ‘drought shout’ at Sherenden where people came to a BBQ to have a beer and chat, and listen to some great speakers. He believes that it’s time for one again this year because farmers can feel isolated during these times.

Connor says rural professionals and the Rural Support Trust do a great job looking out for people in need and says other farmers can look after their mates too. But what worries him most is that mental health is such a taboo subject and people are very cautious about discussing it.