Fonterra has little clout with Beingmate 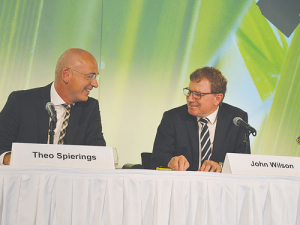 Theo Spierings and John Wilson face the music over Beingmate at half year result announcement.

Fonterra's lack of majority control over troubled Chinese company Beingmate is hindering efforts to turn it around.

Fonterra chief executive Theo Spierings says the co-op has been transforming its businesses around the world with great success.

He points to Australia where after losing money for years the business returned to profitability last year.

“We do know how to transform,” he says.

But Fonterra’s problem with Beingmate is that it owns only 18.8% of the company. In Australia, the co-op owns 100% of the business.

Spierings says Fonterra is using its two directors on the Beingmate board to “protect the company going forward”.

Fonterra’s board has approved a $405 million impairment (write-down) in its half-year results announced recently, valuing its stake in the infant formula trader at $204m. The co-op paid $750m for its stake in 2014. The write-down is causing angst among Fonterra’s farmer shareholders.

At Fonterra shareholder meetings last week, farmers grilled directors and management on Beingmate. Waikato Federated Farmers president Andrew McGiven, who attended the Te Aroha meeting, told Rural News there were a lot of questions around the Beingmate saga. He says farmers are keen to know what the board and management are doing to address the issue.

Spierings, who will leave the co-op by the end of this year, believes Fonterra’s business in China remains strong despite the Beingmate setback.

He defended the decision to choose Beingmate, saying it was “at that time the number-one infant formula player in China”.

“Beingmate’s continued under-performance is unacceptable,” he says. “The turnaround of the [business] is a key priority for our senior management team.

“The opportunity in the Chinese infant formula market remains, as does the potential for our Beingmate partnership; but an immediate business transformation is needed for Beingmate to benefit from the ongoing changes in the market.”

Spierings accepts that the recovery of the investment in Beingmate “is the number-one immediate priority”.

“To be blunt, the investment in Beingmate has not gone the way we expected and there are things we would do differently knowing what we know now. We are focused on doing all we can to get things where they need to be,” Spierings says.