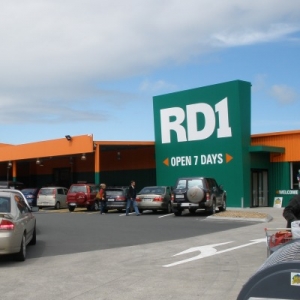 A full makeover of Fonterra’s RD1 retail stores is on hold until the co-op’s finances improve.

It will not refurbish existing stores and milk tankers in the new Farm Source livery launched in Methven last year.

Farm Source includes turning 67 RD1 stores into hubs where farmers could drop in for coffee, use free wifi, hold seminars and meet with Fonterra representatives.

Farm Source is also offering shareholders a loyalty programme, exclusive deals with other service providers and help in managing shares and capital. Fonterra chairman John Wilson says Farm Source is moving ahead with these plans and is already saving money for farmers.

But the full brand changeover has been pushed back, he says. “There’s no point in spending money on paint and timber just for a rebranding exercise,” Wilson told Rural News. “The look of Farm Source is being slowly done but the actions are going well.”

“From a perspective basis, it’s a right move; things are tight and by painting buildings Fonterra will not be sending the right message,” Hoggard says.

He says Farm Source is a good concept and farmers are saving money through special deals and loyalty programmes offered by the co-op. “It’s a good start and its make sense for Fonterra to have Farm Source.”

Four new stores were in the pipeline before Farm Source’s launch; these stores will carry the new livery. The Methven store was launched in September last year; a new store in Culverden opened last month in the new livery.

Wilson says the new stores will be Farm Source hubs rather than RD1 stores. “But the rebranding of all our stores as Fonterra Farm Source will wait until we have some discretionary income to spend.

“It’s the actions that are important – not the ribbon that’s tied across the bow but what’s inside the parcel. Inside the parcel it’s good, it’s happening and the team is driving it hard. But we are not putting the wrapping paper around it and tying the bow neatly just yet.”