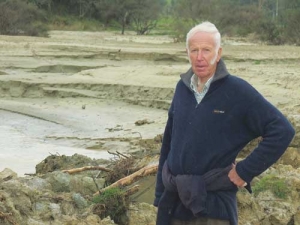 It is three months since devastating floods hit the lower North Island. While the mess is gone from Whanganui city, and normal life has resumed, in the country it’s a far different story, writes Peter Burke.

On the day I headed north to Whanganui the weather was almost as bad as in June: heavy rain, streams overflowing into paddocks and stock on many farms seeking high ground. Farmers were feeding out to stock.

Even only 20 minutes drive from Whanganaui you’d think the rains had never stopped. Hundreds of hectares were covered in slimy silt impossible to remove or work because it’s so wet.

Drive up any rural road and you face massive slips that have ripped out fences and trees and blocked streams. Some fences have been repaired, but many slips are still moving and it’s pointless trying to re-fence. Workers constantly clear debris to keep roads open.

What you can’t see from the road are the hundreds of kilometres of farm tracks yet to be properly repaired because farmers are still waiting for diggers or for the ground to dry out because it’s too wet and dangerous to work on. Neither can you see the thousands of other slips on farms, and damaged and wrecked infrastructure which, in some cases, may never be properly repaired.

The Government declared this a ‘medium’ scale event which effectively said it was bad -- though not as bad as 2004 – and it has made various financial contributions to help farmers. But it’s the local Rural Support Trust that has lived with and continues to help farmers work their way through this crisis.

A small team of people meet each day at an office allocated to them by MPI in Whanganui.  Brian Doughty and Lyn Neeson are elected Fed Farmers provincial presidents, but since the June floods they are spending most of their time working for their Rural Support Trust (RST). Also with them is Harry Matthews who has the title of agricultural recovery facilitator, which means he is paid to do much of the field work and interact with farmers.

Doughty has lived in the region for 65 years and knows it well. He says the 2015 floods have caused devastation of the rural area on a scale he’s never seen before. In the first few days after the flood Doughty was wearing his Feds hat – collecting data and contacting people -- but when MPI declared it a medium scale event he reverted to his role as a member of the RST and spends most of his time on trust work.

“Comparing this event and 2004, the damage this year is significantly greater for a smaller number of people. We estimate that about 200 people have been severely affected and that on average the floods have cost them each about $100,000. To add to the problem, the rain hasn’t stopped since June so there has been no grass growth. In June people were financially stretched to the max and it’s just continued. I know that farmers have had diggers booked for this month  and it’s not going to happen because it’s too wet and the ground is still slipping,” he says.

The Ruapehu/Whanganui RST works well, says Brian Doughty, because the members work well together and support each other. Two other members, Linda MacKinder, chair, and Richard Steel, farm in the Taumarunui area.

Doughty says the team culture of the trust is the key to their success and they have an excellent relationship with MPI which funds their operation.

A new initiative has been launched to provide up to $6000 worth of independent advice to farmers struggling with farm debt.

Flooding is affecting over 100 dairy farms in Southland and South Otago, says DairyNZ.

A recent survey has highlighted the important role of the Rural Trust Support during natural disasters.