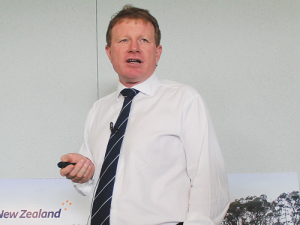 A special meeting in Palmerston North on Wednesday will require at least 75% support; Fonterra’s attempt late last year to pass the reforms received only 64% farmer support.

The key change proposed to the governance structure is that farmers would directly nominate their own choice for selection to the board. A reduced 11-director board and first-past-the-post voting rather than the current single-transferable-vote model have been retained from the original proposal.

Wilson says 64% accepted the last proposal and the board listened “very carefully” to those who did not.

“We have tweaked the proposal and addressed the question of choice; now any farmer shareholder can stand in his or her own right,” he told Rural News.

“We’ve had this conversation for eight months with our shareholders; it’s great for the co-op and gives our farmer shareholders a greater understanding, but farmers believe it’s time to move forward. From the feedback it sounds as if we have the support required to pass the reforms.”

Former Fonterra directors Colin Armer and Greg Gent prompted Fonterra to restart the review after filing a remit to reduce the board to nine at the 2015 annual meeting; the remit, though supported by a majority of farmers, did not get the 75% needed to pass.

Armer told Rural News he still has questions about the revised proposal and will comment later.

Fonterra currently has 13 directors; under the proposed new structure the board would be reduced to 11 directors – seven farmer-elected and four appointed.

Farmers supported the proposed size and composition of the board. They also liked the proposal for an attributes and skills matrix.

Wilson says the review committee thought carefully about having an independent selection panel recommend a shortlist of candidates for farmers to vote on, but farmers did not support this.

“A vote off a shortlist does not answer farmers’ calls for choice; it just gives farmers more of the same – candidates by the same process, measured against the same criteria by the same people.

“The best way to give voting farmers a real choice and achieve the outcome we are looking for is to enable farmer candidates to stand outside the nomination process.”

The review also included a revamp of Fonterra Shareholders Council and a re-focus on its core constitutional role as a cornerstone shareholder.

The special meeting will start 10.30am at the Palmerston North Convention Centre on October 12.