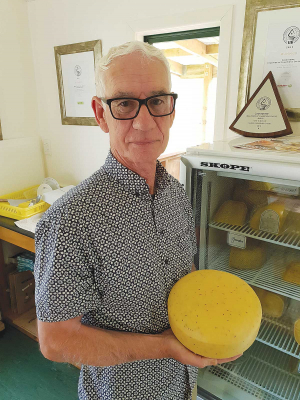 The winning combination is at Oromahoe, 70km north of Whangarei, where Mahoe Farmhouse Cheese has been operating for nearly 35 years.

Founded by Anne and Bob Rosevear, the cheese business now involves their three children – cheesemakers Jesse and Jake and farm manager Tim. Anne and Bob are still involved in the business.

Mahoe Cheese factory and shop is located on the farm, adjacent to a herringbone shed where 70 Friesian cross cows are milked: fresh milk is piped across to the factory and pasteurised on the way.

Every year Mahoe turns 250,000 litres of fresh milk into 23 tonnes of cheese and yoghurt.

A member of the NZ Specialist Cheesemakers Association, Mahoe has scooped many awards.

Jake Rosevear was twice named the champion cheesemaker (2012 and 2013).

Last year Mahoe won the champion of champions award for its cumin gouda in the boutique cheese category.

Bob Rosevear says winning awards is quite satisfying especially when it draws more people to try out their cheese.

“When we won awards for our very old Edam, everyone wanted to taste it,” he says.

Over the years Mahoe has built a strong band of clientele, some based as far away as Christchurch.

“We have customers drive here from Auckland and buy wheels for friends and family back home.

“We also have customers who have been coming to our store for 30-odd years: they first came here as kids and now they bring their own kids to buy cheese.”

Mahoe sells cheeses through its store, selected retail outlets around the country and takes orders via email or telephone.

Bob puts down the success of Mahoe Cheese to the positive vibe on farm: the family has eight to 10 staff depending on work.

“We are very blessed to have our three children working in the business,” he says.

“We’re also very lucky to have staff, who are like family too, some of them have been with us for 30 years.”

Animal welfare is also a key factor for Mahoe Cheese. Cow numbers have halved over the years.

“Our philosophy is to under stock, this way cows are never under stress and there’s always feed even during dry summers,” he says.

Cows are fed mostly grass with silage used as supplementary feed. No feed is brought on farm.

The farm is “pretty close” to being an organic operation but Bob is in no hurry to get organic certification.

“Our operation isn’t certified organic, we follow a humane approach and animal welfare is priority.

“We are autonomous, free from the problems of the outside world; we have happy cows and we are happy.”