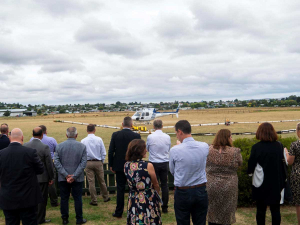 Watching the helicopter carrying SkyTEM take off yesterday at the launch.

As part of the project, a helicopter towing airborne electromagnetic survey technology called SkyTEM is flying over the region’s aquifers for the next six weeks.

The technology is able to scan the aquifers down to 300 metres, further than what has been seen before.

The data provided by the survey will enable HBRC to build a 3D digital picture of the aquifers horizontally and to great depths, enabling a better understanding of groundwater resources.

IrrigationNZ has congratulated the HBRC and its partners on the launch: chief executive Elizabeth Soal says the project is a breakthrough.

“We urgently need more facts about what water we have and where,” says Soal.

“This can inform a sensible water strategy to guide sustainable water management in New Zealand.

“We’re often seeing headlines about shortages in our dry regions which rely on water for their communities, their recreation, and their livelihoods.

“If this initiative by Hawkes Bay Regional Council is successful, we can repeat this elsewhere to get a nationwide water map to understand more about this critical resource. And then we can act on what we know.”

The project is a collaboration between the HBRC, the Provincial Growth Fund (PGF) and GNS Science, using Danish SkyTEM technology that has been used extensively overseas.