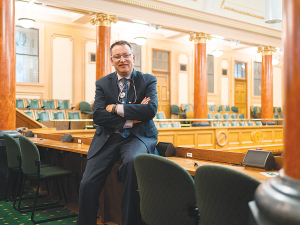 Shane Reti claims the proposed health reforms are all about bureaucracy and not outcomes.

Reti claims the reforms are all about bureaucracy and not outcomes and says there is not a single commitment to a health outcome or target, but adds there will be layers and layers of bureaucracy.

He says the reforms are ideologically driven and are about centralisation.

He says National will focus on outcomes and not bureaucracy.

"We are very concerned that Wellington bureaucrats are going to be making decisions that should be made by local people and the voice of local rural and provincial communities will be lost," he told Rural News. "The bill is a Treaty response and whether Labour believes that a Treaty response is a higher priority and deserve a great focus than rural and some other groups is a matter of opinion."

That is not to say Maori health is not a priority, because it is, says Reti.

"But in my view, distribution of health resources should be based on need, not on a Treaty response. You can't base a health system on anything but need."

Reti has done time as a general practitioner working in rural communities in Northland in towns such as Dargaville and Rawene. He says he knows what it's like to be miles away from laboratories and secondary tertiary receiving centres.

"I understand that space. I know that rural areas struggle to get an equal level of care of more urban environments and there are a number of reasons for this," he explains.

"There are health workforce issues, data connectivity, data collection issues and a wide range of issues in rural that are more problematic than in urban and that has been the case for a while."

Reti believes the primary health care services in rural are "broken" and have been for a while. He says Covid is increasing the burdens on the sector. He point to the present long waiting lists for people trying to see a specialist, which he claims stands at over 30,000 nationwide. He says people should be able to access one within four months, and less if they have a serious problem.

According to Reti, it will take until January 2024 to get the new system up and running and says, with the country trying to grapple with the Covid pandemic, he can't think of a worse time to bring in reforms instead of focusing on the immediate needs of people.

"More money, more bureaucracy and worse outcomes are the only things Andrew Little's health reforms will delivery," he says.