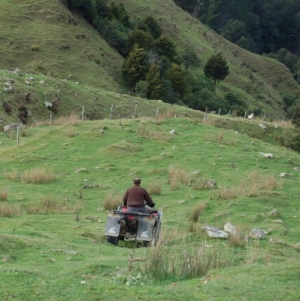 A MARLBOROUGH man has been fined $15,000 for not wearing a helmet while riding a quad bike at work – and for carrying a helmetless child as a passenger.

It is believed to be the first time someone has been convicted for carrying a passenger on a work quad bike.

Herd manager Rangi Holmes was sentenced at the Nelson District Court on two charges under the Health and Safety in Employment Act for failing to take all practicable steps to ensure his own safety and that of his passenger.

WorkSafe New Zealand took the prosecution after inspectors repeatedly saw Holmes riding a quad bike in the Rai Valley while carrying children, without a helmet in sight. Over the 20 months from February 2012 five such incidents were observed.

In August last year Holmes' employer was issued a notice prohibiting the carrying of passengers on quad bikes and requiring the use of helmets. He was supplied with a copy of that notice, but on October 3 2013 he was again spotted carrying a child on a quad bike. Neither he nor the child had on a helmet.

WorkSafe NZ's general manager of health and safety operations, Ona de Rooy, says Holmes put his own life, and the life of the children he carried as passengers, needlessly at risk.

"Quad bikes are inherently dangerous. On average five people are killed in quad bike accidents and another 850 are injured. They are not toys and need to be ridden with care.

"There was simply no excuse for Mr Holmes not wearing a helmet. Helmets were supplied at his workplace but he chose not to wear one. A helmet can be the difference between walking away from an accident and suffering a permanent, life-changing brain injury.

"Quad bikes designed for one person should also not be used to carry passengers – particularly children in a work environment. Mr Holmes repeatedly showed reckless disregard for safety. He is lucky that WorkSafe NZ inspectors intervened before there was any accident.

"This case sends a clear message to quad bike riders – use your head, and wear a helmet," says de Rooy.