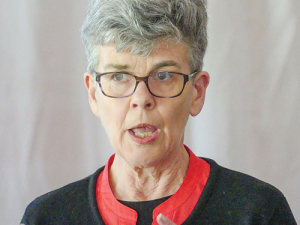 Alliance Group has warned that its annual result, due to be reported in November, will show a drop in profit.

“The financial performance of the company this year will be down... meaningfully,” chief executive David Surveyor told farmers attending the company’s roadshow meeting in Cheviot last week.

However, he assured shareholders the company is profitable, the balance sheet remains “incredibly strong, and for the avoidance of any doubt we have the ability to make sure we build our company forward.”

Surveyor says Alliance will make a bonus offer to shareholders of increased equity based on their supply of livestock through the year, at rates of $1 for each lamb or bobby, $4 for deer, and $12 for cattle beasts. That would amount to $7.8 million in value paid back to shareholders.

Surveyor told farmers it had been a challenging year, starting with a widespread drought and “lots of animals rushing towards us”.

“We made the conscious decision as a cooperative not to drop prices because we knew that was a moment when we needed to be looking after farmers.”

The company put on capacity early and held it, then the rain came and the grass grew and farmers decided to keep bulls, “so effectively the bull season moved about one month to the right”. That then coincided with dairy farmers’ annual cull cows, compounded by the first flush of Mycoplasma bovis culls.

Alliance had to put on overtime at its Pukeuri and Mataura plants, and as well as a Sunday shift at Mataura, another 4000 cattle were shipped to the North Island for processing at Levin.

Surveyor says winter and spring then brought “a fundamental disconnect between the laws of supply and demand”.

This had flattened global lamb prices, yet procurement prices rose about $20 a head, cutting into profit.

However, Surveyor says now that the market is entering the Christmas chilled meat period the margin is starting to widen back into “more sensible territory”.

“If we ever want to break the commodity model that’s what we need to do: keep the faith, keep the drive, keep the performance in the business and make sure we drive for a different outcome for farmers.”

He says a successful trial of consumer packaged meats in Britain last year will be expanding into the US, and other consumer packaging options are being explored such as 100g individual portions, mince and “slice and dice”.

Blood capture facilities being used with bobby calves at Levin and Pukeuri will be expanded to other animals to “capture some products which historically we have not captured,” said Surveyor.

Heather Stacy, general manager, livestock and shareholder services, says Alliance is forecasting lamb prices of $6.50 to $8.10 in the first quarter of the new financial year (to the end of December), easing to $6.40 to $6.50 in the second quarter, reflecting the natural reduction in price as the market goes from the Christmas chilled trade back to frozen.

The Alliance Roadshow events started in Cheviot on September 24 and end at Akaroa on November 26.

Alliance Group has recorded its best profit result in 12 years, shareholders were told at the company’s virtual annual meeting yesterday.

Wynne appointed to Alliance board

Alliance Group has fought off soaring livestock prices and logisitcal challenges to record a healthy profit.

Alliance Group has announced an operating profit of $41.9 million before tax and distributions for the year ending 30 September 2021.

Alliance Group is partnering with the global retail giant Marks & Spencer (M&S) on a range of value-add branded beef and lamb products in Singapore.