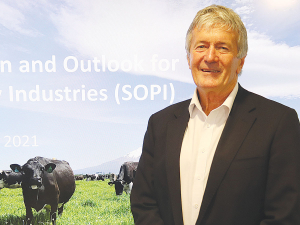 Impressive is how Damien O'Connor describes MPI's latest prediction that horticulture exports will hit the record $7 billion mark in 2023.

In its Situation and Outlook report on the primary sector, published late last year, MPI stated that hort exports for 2022 would be up by 5% on last year and go up a further 4% the following year to reach $7.5 billion.

The report attributes much of this growth to increased plantings of kiwifruit and apples coming on stream, plus continued consumer demand in overseas markets for quality fresh fruit.

However, it does cite warning signs that there will be lower prices for avocados in the coming year and that the grape harvest will be down. Export returns from wine will be modest over the coming two years and so-called 'other' fresh fruit exports, which includes avocados, cherries and blueberries will drop over the next couple of years.

MPI says volumes from the apple sector were better than originally forecast - although export earnings were $831 million to 31 December, which is 10% down on the previous year. A significant hail event in Nelson-Tasman, small fruit size and labour shortages all contributed to the drop. However, export returns for 2023 are expected to be just over the $1 billion dollar mark.

Not surprisingly, kiwifruit exports form the backbone of increases in the overall hort sector. MPI is forecasting a 13% increase in production for the 2021/22 season, which will see 184 million trays produced. Gold kiwifruit production is expected to rise by 15% this season and next season MPI says red kiwifruit will make a greater contribution. The net result of this is that kiwifruit exports will reach $2.9 billion this season and hit $3 billion in 2023.

O'Connor has praised Zespri for the growth it has generated in the industry, saying it has introduced new varieties and worked hard to overcome the logistical disruptions of getting fruit to market.

"They do an extraordinary job in terms of marketing and connecting to the consumers and that is a lesson for other producers," he told Rural News. "The development of the new red variety is also an exciting opportunity."

He says another lesson for other sectors is the way the kiwifruit sector - particularly Zespri - collaborate in the science area. He points to their work with Plant and Food Research and the new plant breeding joint venture.

"I think collaboration is crucial and we have to do better to align our capability to make sure that our CRIs are working together," he says.

According to O'Connor, the Government has made a significant investment in a new quarantine facility, which will allow NZ to bring in new varieties of plants.

"There is a lot going on in that space but I don't think we can rest on our laurels as the world is a very competitive place," he adds. "People are looking at NZ, seeing its success and trying to replicate that so we have got to be ahead of the market."

O'Connor points out that gold kiwifruit is grown in many other countries, but the Zespri brand attracts a premium.