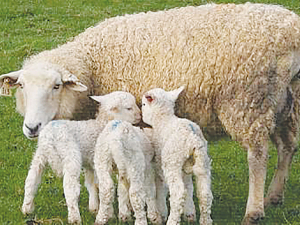 The Dawkins family are striving to maximise triplet lamb survival.

Three years on, their system is seen benefitting the whole farm system and cutting lamb losses.

A recipe for maximising triplet lamb survival is the holy grail of sheep farming but the Dawkins family at Blenheim are getting closer to finding it.

Chris and Julia Dawkins and their son Richard, farm The Pyramid, a 645ha down and hill country sheep and beef farm. They are in the third year of a Beef + Lamb New Zealand Innovation Farm programme aimed at maximising triplet lamb performance through an indoor lambing system.

They have drawn on the findings of previous projects to develop a system that will maximise survivability and profitability in their high-performing composite ewe flock which last year scanned 192% (mixed-age and two-tooths).

Of their 1400 ewes, 232 (16.6%) were carrying triplets (a mix of maternal and terminal lambs) which highlights the opportunity triplet lambs present.

In the first year of the Innovation Farm programme, the family set up a carefully managed system of feeding supplement to the triplet-bearing ewes for three weeks before taking them indoors to lamb. The ewes and lambs were then gradually taken back out – via bonding pens and a holding area – onto high quality forages.

The system was deemed a success, but they were able to identify areas that needed refinement to raise profit.

One of the problem points was when the ewes and lambs returned to the paddock. Chris Dawkins says they found they had to watch the lambs closely for at least seven days after leaving the shed. Even after one week of close scrutiny, they will still go around these lambs once a day, as 41% of the orphan lambs were picked up after leaving the indoor system.

He says 60 years of data shows that the average lamb wastage on their farm has been 24%. Over the years, they have been unable to identify a single cause of lamb losses.

At a value of $148/lamb, this represents a hefty annual loss, let alone the implications for animal welfare and consumer perception.

In the first year they reduced lamb losses to 15% and in the second year it dropped to 14%.

The family focus on lambing is year-round. They use ram harnesses at mating with a crayon change every six days and believe this is critical to the success of their system as it enables them to strategically manage ewes according to their lambing date.

In 2017, the family set up a system that they considered ‘by the book’ good-practice. This included feeding the triplet-bearing ewes supplement three weeks out from lambing, changing the straw in the lambing shed daily, using disinfectant and iodine and continuing to feed supplement one week after lambing. This was to allow a smooth transition back onto pasture.

Last year they refined the system and only fed the ewes supplement five days out from lambing and fed peas and lucerne hay instead of more expensive nuts. They put fresh straw on top of the old straw and stopped using disinfectant and iodine. They didn’t feed supplements to the ewes after lambing.