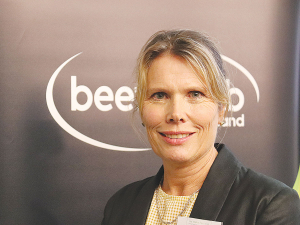 Nicky Hyslop says B+LNZ is aware of the challenges that lie ahead for the sheep and beef sector.

That's how Beef + Lamb NZ director Nicky Hyslop, describes the recently announced report by the primary sector climate change action partnership on how the Government should deal with agricultural emissions and sequestering carbon on farms.

Hyslop, who was at the public announcement of the report known as He Waka Eke Noa (HWEN), says farmers were adamant that they didn't want agriculture in the Emissions Trading Scheme (ETS) as proposed by the Government.

HWEN comprises 13 primary sector groups - including Māori agribusiness - and was set up in 2019 in a bid to stop the Government lumping agriculture into the ETS. Since then, it's been developing an alternative approach and says it has consulted widely on this.

The main recommendation of the 80-page report is that a farm-level, split-gas levy - with built-in incentives to reduce emissions and sequester carbon - be adopted from 2025. The farm-level concept is seen as the more forward-looking approach becaus it rewards, by way of a reduced levy, those individual farmers who cut their emissions, while those who don't will be required to pay the full levy.

The other key element in the report is a proposal to set up an Oversight Board and a Māori Advisory Board to ensure that the interests of farmers and Māori are considered during the implementation phase.

Hyslop says B+LNZ is aware of the challenges that lie ahead for the sheep and beef sector, but says her organisation is committed to playing its part in supporting HWEN. She says the report is detailed and complex and she doesn't expect all farmers to necessarily read or fully understand the implications of the report.

"One of the roles of B+LNZ is to digest that information and get it out to our farmers so that they really do understand it," she told Rural News.

B+LNNZ chairman, Andrew Morrison, who was overseas when the report was released, says the farm-level levy system is the best option available.

"It's not perfect but it's significantly better than the ETS for farmers. Let's be really clear about this - this process has been hard and it's a major achievement to have worked collaborativelhy across agriculture and with Māori and government to produce a joint recommendation," he says.

She says this emissions pricing system will demonstrate to New Zealanders and to our global customers that we're committed to producing environmentally sustainable red meat.

And that our story is backed by science and modern farm management practices.

"We believe this option is the only way to ensure the NZ sheep and beef sector can continue to be a global leader in climate action, while remaining profitable and viable," she says.