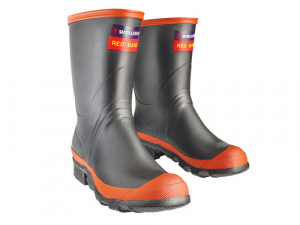 Be in to win 1 of 2 pairs of Skellerup Red Bands by subscribing to our newsletter before May 18: http://eepurl.com/bATYV1

Their passion runs to buying 100,000 pairs annually; laid end to end they would tower 10 times taller than Aoraki-Mount Cook.

Skellerup, the maker of the wide-topped mid-calf, step-in gumboot with its signature red bands and toe caps, this year celebrates 60 years of making them. And they haven’t changed them apart from adding a sponge insole for comfort.

Skellerup national manager footwear Perry Davis says Red Band gumboots were the first short boots ever made in New Zealand if not the world.

“Traditionally, gumboots have always come up to just below the knee,” he told Rural News.

“No-one is sure who at Marathon Rubber Footwear – the forerunner to Skellerup – had the idea to create a shorter boot, but in 1958 the concept was tried out.”

Red Bands were made in Skellerup’s Woolston factory in Christchurch until the late 1980s when the company opened a factory in Jiangsu, China.

Notable features are natural rubber compounds with built-in UV inhibitors, a heavy-duty non-clog cleated sole and 100% cotton canvas bonded to the rubber for the boots’ strength, flexibility and protection.

Hand-made to the original specifications of 60 years ago, each boot has 19 components in at least six different rubber formulations.

Interestingly, Kiwis typically have wider feet than many other nationalities – a detail discovered by Skellerup footwear designers over time. The popularity of Red Bands shows they’re getting them just right.

In 1958 the firm made Red Bands in only one style; today they’re made for the whole family, e.g. Red Band juniors for kids, plus socks, work boots and clothing.

Filling the vat with the best milk you can produce is a financial advantage, says milking liner maker Skellerup.

In the year Skellerup’s iconic Red Band gumboots turn 60, the company is celebrating a record profit.

Red Bands still on the march

The maker of revered Kiwi Red Band gumboots is this year celebrating 60 years in production.