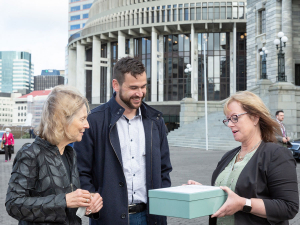 Over 60% of pork consumed in New Zealand is imported with most of it being produced in countries that farm pigs using practices that are illegal in this country.

The petition was presented to National’s agriculture spokeswoman Barbara Kuriger at Parliament on 10 May.

“New Zealand pig farmers deserve a fair go so we believe it’s time that imported pork is required to meet our high standards.”

The call for pork imports to meet New Zealand’s standards coincides with the Government recently releasing a draft code of welfare for pigs, which goes beyond the welfare requirements in other countries, endangers the viability of New Zealand’s pork industry and threatens to put the price of local pork out of the reach of many Kiwis.

“Our standards are already much higher than the rest of the world,” says Kliess.

“The proposed code would widen that gap even further. It’s more important than ever that we support our farmers to be the best in the world.

“Even a report commissioned by the Government has calculated that the draft code will result in a 18.8% increase in the price of all New Zealand produced pork, a tsunami of imported pork undercutting local farmers and a reduction in the sales of born and raised New Zealand pork.”

New Zealand imports pork from a range of countries, including the United States, Spain, Canada and Poland.

Overseas, some pig farmers routinely castrate all male piglets, often without pain relief. In New Zealand, this procedure is rarely ever carried out, and if it is, only a veterinarian can do so and mandatory pain relief is required.

Gestation stalls for pregnant sows are also banned in New Zealand. The EU allows the stalls for the first 28 days of pregnancy and most states in the US allow them for the entirety of a sow’s pregnancy.

Unlike other countries, antibiotics are not used as growth promotants by New Zealand pig farmers. Porcine somatotropin, a pig growth hormone, is also not used in NZ.

“New Zealand’s commercial pig herd also has a high health status and is not affected by the diseases that are having a very serious impact on pork industries in many other countries,” says Kliess.

“We urge Kiwis to back New Zealand pig farmers and always look for a 100% NZ Pork label so they know they’re getting a cut above the rest.”