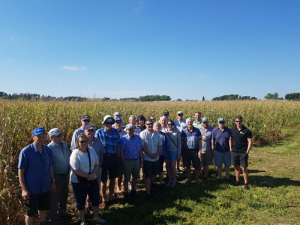 The IrrigationNZ team at a Nebraska farm.

A team of farmers and irrigation experts has returned from a trip to Nebraska with some fresh ideas about how to improve environmental management in New Zealand.

IrrigationNZ organised a five-day trip to Nebraska for its members. The 25-member team included 15 farmers; the team also included farm and environmental consultants and irrigation schemes and service industry representatives.

“It was really interesting to hear the history of Nebraska from different experts. Nebraska was one of the states which was devastated by the dust bowl storms in the depression and farming families had to leave the land,” says Darfield farmer Paul Jarman who joined the tour.

“After the depression they started to adopt better land management practices to keep their top soil. They also invested in irrigation systems and the state is now very productive,”

By 1932, 750,000 acres of farmland had been abandoned in Nebraska due to soil erosion and dust storms. One of the worst dust storms occurred on 14 April 1935 on “Black Sunday” when strong winds blew an estimated 300 million tons of topsoil from the prairie states as far as the East Coast and Washington, turning the sky black in its path.

Nebraska has experienced some of the problems New Zealand is currently focused on. Nitrates in groundwater are a significant concern. However, in recent years the state has managed to turn a trend of increasing nitrate levels around in many areas.

“Water quality and quantity management plans are developed which identify any problems. An implementation plan to address the issues is also developed. Groundwater is managed by local Natural Resource Districts which have elected boards made up mainly of rural representatives,” says Curtis.

“The farmer representatives are very proactive in encouraging other farmers to adopt more sustainable practices. The districts have focused on data collation, investment in good science, farmer-to-farmer education, and best practice standards coupled with incentives. They are investing in a range of farm and catchment based solutions like river augmentation and managed aquifer recharge projects. The widespread move from surface flood to centre pivot irrigation has also been key to reducing nitrate losses to groundwater.”