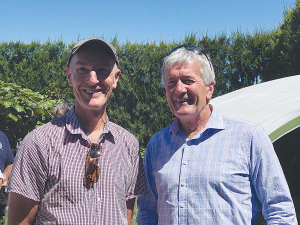 One group has described the move as a ‘good moment for NZ’.

The Government introduced the new Bill last week and after its first reading it will be referred to the Primary Production Select Committee for the public to have their say on the proposed changes.

He told Rural News that they have had on-going discussions with the organics sector for a number of years and that they have always been seeking uniform standards. He says the legislation is largely at the request of the industry.

“We have progressed this because it provides certainty and security for people who are considering going into organic production, while at the same time giving confidence to consumers that what they buy as organic is true to label.”

O’Connor says up until now there has been no specific legislation relating to organics. He says under the Commerce Act there are rules that those dealing in organics must be honest in terms of their marketing and labelling of products.

However, he claims now days there is greater emphasis on traceability and integrity of products and this legislation will bring NZ into line with the laws in many other countries.

O’Connor adds that many existing organic growers are covered by the certification systems now in place and for them the new law will not involve massive changes – maybe just tweaks. He says the main things about the law is that it show consumers that products coming from NZ have the approval of the government, which will adds to the credibility of the product both domestically and internationally.

“Meantime, domestic and global demand for New Zealand organics saw the sector grow 30% between 2015 and 2018 to be worth more than $600m, according to a report from Organics Aotearoa New Zealand,” he says.

“The report also showed organic fresh fruit and vegetable exports were up 24 per cent, dairy, meat and wool exports up 45%, and wine exports up 13 % from just three years prior. Now is the time to put a framework in place to help sustain and enhance this growth.”

“We’ll continue to work collaborative and constructively with the government and other organic producers, including HortNZ, to promote the passage of the much-needed national standards and regulation to grow the organic market for New Zealand certified products,” says Voss.