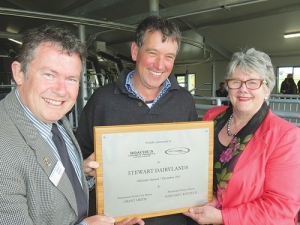 A Manawatu dairy farmer has taken a major step to bridge the rural urban gap with the design of his new $1.5 million, 54 bail rotary dairy shed.

James Stewart, Federated Farmers provincial president for the region, runs 500 cows on 200ha within the boundary of Palmerston North city.

When he decided it was time to replace his much smaller shed, he designed the new one in such a way that it would be city-friendly.

What Stewart has done – as well as building a modern, high spec, high tech shed – is include a viewing room from which 30 people can watch the entire milking operation.

"We are city farmers and are inside the Palmerston North city boundary. I always said if I built a new shed I'd build something that would cater for all the visitors we get because we are so close to the city," he told Rural News.

"They can see the milking process easily from the viewing room. In my role with Feds I've made a big push for that engagement with the urban population; so I thought let's make it viewer friendly for people outside the dairy industry. We are only a short drive out here and if people want to come out and have look we can show them good practice farming and what it's all about."

Stewart says the viewing room cost a bit extra, but in the big scheme of things it was not huge. He's had to shuffle a few things around to fit it in, but he feels it is well worth the investment.

This view is shared by the mayor of the Manawatu District Council, Margaret Kouvelis, who with the mayor of Palmerston North city, Grant Smith, officially opened the shed last week. Kouvelis shares Stewart's passion to help the urban community better understand how farmers operate and that they are not rogue individuals as suggested by the recent television footage of bobby calf abuse.

"We can't expect our citizens in the cities and towns to understand the rural way of life unless we tell and show them; give them a feel and a smell and a touch and experience," she urges. "This new shed is the ultimate rural experience and it's from a family with extraordinary values. This is putting up the flag for the future and demonstrating what can be done. It shows our farmers are sustainable, innovative and are embracing new technology for the benefit of this country's economy."

Palmerston North mayor Grant Smith says his city realises the value of the rural community, adding that the rural economy and its people "fuel the city". He says the initiative by Stewart and his family will do much to help educate children about the importance of the primary sector.

Smith says other countries know just how good NZ farmers are and when he was in China recently the people there "craved" NZ farming practices.

For Stewart, the shed opening came at the end of what he describes as a pretty rough week in the dairy industry, when it copped a lot of uninformed comment.

"There is a real education need. We have a whole generation coming through that don't understand what farming is about and think milk comes from the supermarket," he says. "We have 80,000 people in the city right on our back doorstep and one of the reasons why we did the viewing room was to have the ability to bring groups through."

The final touches and adjustments are being made to the shed and the cows are expected to get their first experience of modern technology in action this week.

Stewart says it's gone slightly over budget and over time, but much of this was due to wet weather and the challenge of building the shed on clay. He says the shed has a few 'bells and whistles' such as automatic cup removers, teat spraying, testing for mastitis and drafting.

But he says it has been designed in such a way that more technology – such as milk metering – can be added in the future.

"I wanted labour efficiency, so one person can drive the shed. I just wanted to move cows in as quickly as possible and have it labour-friendly and this is supported by technology," he told Rural News.

"I also wanted it to be water efficient; so there is a recycle flood wash which takes water from the pond and reuses it for the automatic flood wash."

Stewart says the latter was to reduce water for washdown and being more environmentally friendly.

There is also one special but not so obvious feature in the shed. Being descendants of a famous Scottish clan they have a thistle cut-out on some of the supports in the shed.