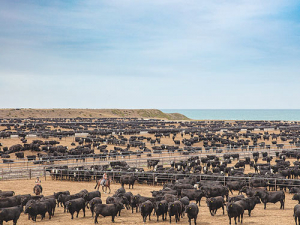 The call follows ANZCO’s Five Star Beef feedlot being thrust into the public limelight after the discovery of M. bovis.

Part of the reason it came as a surprise to the public that the Five Star feedlot even existed is that it had no welfare issues, he adds.

“I would argue we are exemplary in the way we present the cattle and the way we maintain the feedlot. I’m comfortable in that,” Bunting told Rural News.

He accepts there are other points of view, “but from our perspective, those cattle are very well cared for”.

The feedlot pens consist of straw bedding on a stabilised base. Part of the rationale for its coastal location is the more temperate climate than found inland.

Bunting says the feedlot was subject to environmental consents and conditions, subject to expiration.

“I suspect we’ll be like many people in the rural environment, where we’ll have to give consideration to what our farming systems are going to look like going forward.”

Bunting says the whole industry is probably feeling the scrutiny of the public.

“Whether it’s social license, consumer trends or whatever, there’s certainly a requirement to be very mindful of what that landscape might look like because one thing’s for sure, it’s going to constantly change.”