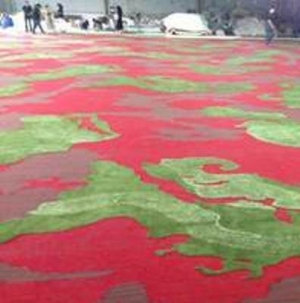 A giant 1,018m² rug made with more than 3,000kg of pure New Zealand wool is headed for the Guinness Book of Records as the largest single-piece rug ever made.

Manufactured by the Beijing Jin Baohua Carpet company for Beijing's new International Convention Centre, the rug will be a showpiece for the Asia Pacific Economic Cooperation (APEC) annual conference to be held in Beijing in November 2014.

Aside from its sheer size (it holds the equivalent raw wool of between 800-1,000 ewes) the hand tufted rug was produced without joints and transported and installed as one complete piece, taking a team of 100 workers two months to complete.

Stephen Tan, manager of Wools of New Zealand's Beijing office and a judge for the record book attempt, says, "the rug showcases a traditional cultural background, giving expression to human peace and harmonious development. New Zealand wool was the obvious choice, given its quality characteristics and consistency, making it perfect for deep dyeing and vibrant colour display."

Mark Shadbolt, chairman of Wools of New Zealand, says manufacturing a rug of this scale and quality is a tremendous and ambitious achievement. "The fact that it was made exclusively using New Zealand wool reinforces the recognition we have particularly for premium hand tufted and hand carved rugs internationally, as well as the importance of having representation in China, New Zealand's most significant market for strong wool."

Beijing Jin Baohua Carpets also holds the existing record, for a 729 m² rug it manufactured in May 2009 – hand woven from New Zealand wool.