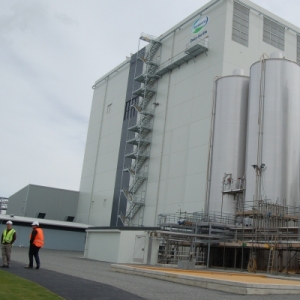 He paid tribute to Fonterra's contribution to the New Zealand economy and our reputation worldwide.
Key says Fonterra is New Zealand's only "truly global champion".

"The Fonterra brand and name is known around the corporate world," he says.

The new factory processes around 2.4 million litres of milk in a single day. A second plant is under construction and it will triple Darfield's capacity.

Fonterra chief executive Theo Spierings says Fonterra's Darfield site represents a great achievement for the operations teams that had overseen its construction and successfully commissioned the plant just as the new season got underway.

"This is a tribute to the hard work of more than 1500 people who have built a world-class dairy processing site – from paddock to powder – in just 18 months," Spierings says.
"Since August, when the first bags of whole milk powder rolled off the production line, more than 30,000 metric tonnes of high quality product have been produced, destined for customers in China, South East Asia and the Middle East. That's enough to fill about 1300 20-foot containers.
"This new site is already playing an important part in delivering on our business strategy. It is one of our most efficient plants, with the capacity and flexibility that will help drive further performance improvements and a better payout for our farmers."