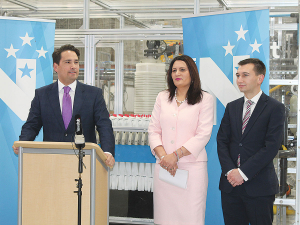 The party says it will be ready to go out and consult on a proposed review of the legislation and our current regulations if elected.

“If we want to be more efficient and productive in our various sectors in the economy -- from farmland to horticulture through to precision engineering and high tech -- then moving this way is the right thing,” he told Rural News at the launch of the policy in Auckland this month.

“We have signalled and asked for feedback on whether we should update and modernise the area of biotechnology,” Bridges said.

Dr Parmjeet Parmar, the National Party’s spokesman for research, science and innovation, says Plant and Food has worked on improving the taste of a variety of red apple which also has red flesh, but under present legislation on biotechnology the scientists can’t taste test that apple.

She says the organisation had to apply in the United States to taste the apple. Plant and Food developed an apple that tastes like an apple. But after that was done the scientists could not taste that apple in NZ. They had to apply to the US to taste it.

Parmar says the current Act itself allows “caution progress” but when scientists reach the step of field trials, they go out of NZ because they find it too difficult under the HSNO Act.

“But using those techniques, how many years does it take for you to know that apples will be exactly what you think? The apple tree has to grow, you need to get apples on that.”

Parmar says using new types of biotechnology in gene editing such as Crispr can precisely and quickly make the changes.

“You are making exactly the same changes as natural selection, which is actually mutating it. But you don’t care about the genotype, you care about the phenotype -- the traits you are looking for.

“With Crispr, if you know the genome sequence you can go in there and make exactly the same kind of changes. You know for sure the trait you are looking for will be expressed.”

But Crispr is classed as genetic modification under our current legislation. Another example is a high metabolisable energy ryegrass, developed by AgResearch, which has been very promising in controlled conditions for reducing methane emissions in livestock. It also looks promising for reducing greenhouse gases and nitrate leaching.

“So who would not want that grass? But when AgResearch came to the stage of field trials they had to go to the US because they didn’t want to be working under the HSNO Act,” Parmar explained.

“This doesn’t mean they bypass NZ, because if it is successful there they will have trials in NZ in our climate and on our soils.

“But we have pushed the time out when we could benefit from that research by at least five to 10 years.”

Parmar says both examples she used are from Crown Research Institutes (CRIs).

“This is because this is a very expensive field of work. Our CRIs, universities and other research institutes have access to Government funding.

“NZ’s biotech research is very small not only because of funding reasons but also because of the HSNO Act. If CRIs can’t be bothered dealing with the HSNO Act why would small private companies?”

Speaking on October 8, Parmar said that on that day Australia had implemented its policy change in regard to gene editing.

“So what is stopping our biotech companies from moving to Australia?” she asked. “This is a high value sector.

“The work happening in this field is being vetted for intellectual property rights everywhere in the world. This is a field that requires highly skilled workers,” she said.

OPINION: National's new leader Christopher Luxon’s first speech after his elevation to the top job included one important line about the engine of the economy: “Our provincial heartland feels taken for granted. Our farmers are not villains!” he told the press gallery.