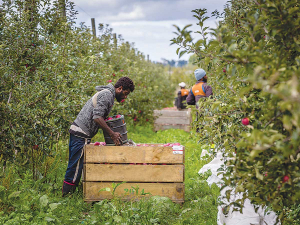 The horticultural sector is worried about finding sufficient labour to pick and pack the new season’s harvest.

She says the horticultural sector is extremely worried about finding sufficient labour to pick and pack the new season’s harvest.

“The ability to access critical workers through the Recognised Seasonal Employer (RSE) scheme remains very uncertain and there will be significantly fewer backpackers looking for work this summer,” she says.

“There is little doubt that more New Zealanders will be employed, but it is extremely unlikely there will be sufficient locals available to fulfil these physically demanding roles.”

Therefore there is a very high risk that some fruit – particularly summer fruit – won’t be able to be picked.

Most growers are fully focused on the season ahead as the apple-exporting season draws to a close.

He said growers believed they should be able to bring in workers from Covid-free countries.

Jones said plans were in place to ensure workers who come for the seasonal work could get back home again.

Kilsby believes there’s still time to get workers into the country.

“If the wheels are put in motion now, workers could be here in time for the main harvest, which kicks off in late February, but they won’t be in the country early enough to assist with early-season orchard management tasks,” she told Rural News.

“Even if RSE worker numbers are allowed into New Zealand in similar numbers to last season, the industry will still be severely short of workers given there will be very few backpackers – who have traditionally been a major labour source – in the country.”

Apple growers don’t currently have sufficient labour to manage early season tasks like thinning. This means the industry will be more reliant on chemical thinning – a process used to stress the tree so that it drops a portion of the fruit it is bearing.

Kilsby points out that this approach means the fruit that are thinned are not able to be selected for quality, resulting in a much wider range of fruit sizes and quality (colour etc) when it comes to harvest.

Without hand-thinning, it is therefore likely that the overall value of next season’s crop will be negatively impacted.

“If there are not sufficient pickers at harvest, then fewer picks of each tree will occur,” she says.

“One reason why the standard of New Zealand fruit is generally very high is because each tree is picked three or four times, with only the ripest fruit being harvested each time.

“If there is not sufficient labour available, orchards may only be picked once, meaning not all apples will be picked at the optimum time, or a portion of the fruit will simply be left on the trees.”

An eye on costs is key

While the outlook for global food prices is positive for New Zealand primary producers, some challenges lurk in the year ahead.

The weather is playing a role in the performance of the dairy industry this year, according to the ANZ Bank's latest Agri Focus report.