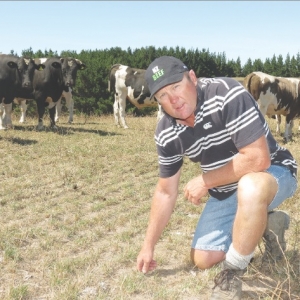 THE APPARENT lack of a real ‘spring’ has triggered rapidly developing drought conditions in many parts of Hawkes Bay and the North Island East Coast.

The hills and flats especially around Waipukurau are browning off and stock trucks are working around the clock to take sheep to sales. Those sheep that remain are struggling to find much green grass.

Beef and Lamb New Zealand chairman Mike Petersen, who farms just outside of Waipukurau, told Rural News that while it’s quite normal for the east coast of the North Island to dry off, this season has been unusual.

“The problem we’ve had is that the dry period has set in very early and we have really been dry since October. This is so in some parts of the East Coast and Hawkes Bay and the issue is we really had no spring leading up to the dry period that’s set in now.”

Petersen says farmers who are used to situations like this have responded well and have made good decisions early.

“But there are some concerns that ewe condition is dropping off and there are implications for next season with mating coming up in early March. That’s what’s concerning farmers now.”

Given the present conditions, Petersen says it’ll be interesting to see how many ewe lambs get taken into sheep flocks as replacements. He says it’s unlikely many hoggets will be mated because they won’t get up to weight. This may affect the number of lambs born next season.

Green crops in his area have either failed or not grown well and yields from these crops are low. This has meant farmers have been selling stock earlier than they might otherwise have done. Petersen says almost no supplementary feed has been made in Hawkes Bay, so feed supplies are low.

“Farmers are continuing to sell down just what they can and those that haven’t sold down trading stock are carrying on doing that. It’s just a matter of getting down to your capital stock numbers as quickly as you can,” he says. Prices for some of these lambs have been poor – as little as $50-60.

Like other farmers, Petersen has had to revise his stocking policy. He runs cattle and then buys in lambs for finishing.

“I was planning to run 3000 lambs, but instead I now only have 650 on the property. Any lambs we have are on green crops and these crops are only a fraction of what they should be. We have a number of paddocks where they have completely failed, particularly some of the chicory and plantain crops we planted. They haven’t fired at all.”

Petersen says farmers are selling into a soft store market and that’s affecting confidence. But there are few other options; dairying is not on. But he points out that though the situation is difficult it’s not the end of the world.