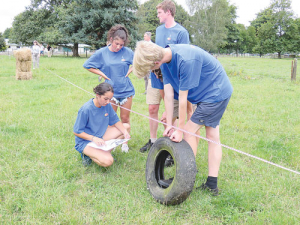 Exposing youngsters to such opportunities is a key aspect of the 2018 Rabobank Waikato Agri-Leadership programme, funded by the bank to grow future agri-leaders in New Zealand.

The 26 high school students involved, mainly from Waikato and some from Auckland, were via a selection process.

“Many were from city and urban backgrounds,” Walters explained to Rural News.

“We were trying to get more people, including those not from rural backgrounds, to understand the vast opportunities available.”

Guest speakers and industry leaders like Environmental Protection Agency chief scientist Jacqueline Rowarth and KPMG’s Ian Proudfoot opened their eyes to what they could achieve in the sector. Visiting various organisations, including Fonterra and Plant and Food, was also enlightening.

“A lot of the students did not realise how broad the sector was and the opportunities it offered in engineering, science and business. It is not just typical farming.”

Seeing the automated production processes at Fonterra was “incredible” as was the contrasts between different industries.

And the contrasting viewpoints of various speakers were also an eye opener.

“It was interesting to see how such high calibre people had such differing opinions on where New Zealand agribusiness should stand in future,” says Walters.

Proudfoot spoke on ‘vaping food’ – experiencing food through vapourising it – and more personalised value-add products tailored to individuals rather than selling the one product to hundreds of thousands of people.

The students had a debate that night on the proposal that ‘Synthetic proteins are the future of New Zealand’. The team that argued they were not the future won the debate. “But it was interesting to hear the pros and the cons,” says Walters.

Starting the third year of her four year degree, Walters is not from a rural background herself, but was born overseas and raised in Tauranga. She had “never really been on a farm” before the leaders’ programme.

She says she was inspired into agribusiness and marketing studies when Rowarth, formerly professor of agribusiness at Waikato, came and talked in Tauranga.

“That made me realise the potential of agriculture and I wanted to be part of something so major in NZ,” Walters told Rural News. “She also got me interested in the management of this programme.

“She tried to inspire all the students and this generation so we can, in future, help solve the current challenges.”

Walters says primary industries offer many opportunities that young people, particularly those from urban areas, don’t know about. “That is why I wanted to become a part of it.”

She intends to work on a farm before finishing her studies.