Taking blackcurrants to the top of the tree 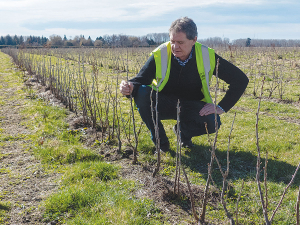 Tony Howey with young blackcurrant plants growing through straw mulch on his farm at Pleasant Point, South Canterbury. He is also trialling plastic weed mat, and sheep to keep the grass down, saying weed control is the toughest part of running a fully certified organic operation. Photo: Rural News Group.

South Canterbury organic blackcurrant grower Tony Howey wants to topple blueberries from being publicly perceived as the ‘king of antioxidants’.

Instead blackcurrants, with their very high vitamin C and anthocyanin levels, actually contain up to 2.5 times more antioxidants, he says.

“In terms of all the goodies in them they’re just great. That’s one of the reasons we’re concentrating on blackcurrants,” Howey told Hort News. “It’s such a great product.”

Howey is well known in South Canterbury agribusiness – farming potatoes, carrots, onions and other crops. He’s also taken leading roles in developments such as the Opuha dam, packing, processing and milling, and serving on boards including Ravensdown and Horticulture NZ.

But he recently sold out of his cropping business to concentrate on his ‘semi-retirement project’ – the 70ha organic blackcurrant farm and the retail brand ViBERi, which he is developing with his wife Afsaneh.

Enthusing over the health benefits of blackcurrants, Howey says new research in England points to them being “like a legal performance drug” for athletes.

“We can’t say ‘have this and it’ll cure that’ but we can point customers to the research papers.”

The operation is based on a farm on the outskirts of Pleasant Point, which already had blackcurrants when the Howeys bought it in 2004.

But their start was far from easy. At 4pm on December 17, 2004 – the date and time etched in Howey’s memory – a monster hailstorm flattened his fields. He says he lost 160% of the crop – all of that year’s harvest -- and sustained so much damage to the bushes that they took two more seasons to recover.

“So that was a welcome to the industry. But we persevered.”

By about 2001 the industry was moving to low chemical input, nil-residue regimes, so Howey decided it was no big leap to go fully organic and create that as their point of difference.

His 70ha is now the only significant organic blackcurrant farm in the country, fully certified and BioGro-audited.

For organic status, Howey is allowed only limited fertilisers, simple copper and sulphur sprays for disease control, and pheromone traps to control the insect pest clearwing.

The hardest thing is weed control, and he is experimenting with growing the bushes in straw mulch or plastic weed mat, which he says has its own challenges but has provided much better control.

Grass is a problem, especially in the sections set up before he converted to organic. In summer he mows between the rows, but that cannot control grass within the rows. In winter, he grazes sheep among the bushes, but they must be taken out in spring to keep them from eating the blackcurrants’ new growth.

This season, Howey will trial special muzzles developed for use in vineyards, which are supposed to prevent sheep eating anything much above ground level.

The blackcurrant bushes take about three years from cuttings before they are tall enough for the mechanical picker but they can produce for 20 years “if you take care of them,” says Howey.

At 12-15 years they may be renewed by cutting them off at ground level to come away again. He has also done this to help combat clearwing.

Mechanical side pruning keeps the bush sizes under control and the rows clear.