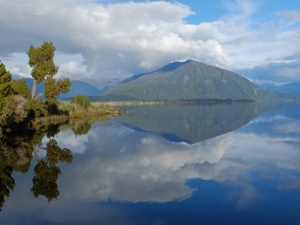 "The early achievement of the target is a fantastic result and goes to show what can be accomplished when government, local authorities, businesses and local communities collaborate to reach a shared objective," Dr Smith says.

"A number of other organisations have also contributed to the project including AgResearch, NZ Landcare Trust, NIWA, and DairyNZ. However none of this would have happened without the hard work and effort of landowners and the local community," he says.

Results from water quality monitoring between 1992 and 2010 showed the lake was suffering from an observable decrease in water quality due to gradual enrichment and eutrophication.

Through the Government's Fresh Start for Fresh Water programme $200,000 was allocated to West Coast Regional Council to support planting and fencing work on both private farmland and community sites.

"By January 2016, when work is due to be completed, over 62 kilometres of fencing will have been erected, 21,000 riparian plants will have been planted on farms and over 5,000 by the Lake Brunner Community Catchment Care Group at the community sites."

Smith says the Government has an ambitious plan for stepping up New Zealand's freshwater management and Lake Brunner is an example of how we can reverse deteriorating water quality.

"The next steps will be a renewed fund to support community initiatives for improving water quality and a discussion paper in the New Year on how New Zealand can better manage freshwater within limits," he says.

Lake Brunner is an important ecological site, providing habitat to a number of threatened species while holding great cultural and recreational importance for the people of the West Coast and local tangata whenua.