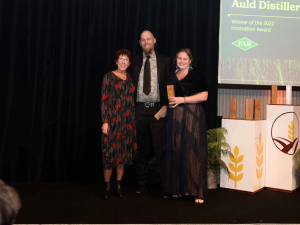 Rob and Toni Auld were presented with the Innovation Award.

The distillery, an enterprise from Rob and Toni Auld, makes a range of three gins from a base alcohol of oats, wheat, and barley.

Auld Farm Distillery has achieved multiple world firsts with their products, something not entirely uncommon for an arable sector seen as world-leading in several categories on the international seed market.

Also a winner was Federated Farmers arable executive member David Birkett who was named Arable Farmer of the Year.

Birkett, who farms at Leeston, Canterbury, was noted as a recognized leader in environmental and sustainable farming, with a focus on soil quality. He is open to trialling any approach to reduce synthetic inputs, like biological products, cover crops, retaining straw, and is always willing to share his knowledge and results.

Angela Clifford was named the 2022 Food Champion for her passionate advocacy for the arable industry. Clifford founded the organization EatNZ, which she uses to promote New Zealand-grown and produced food.