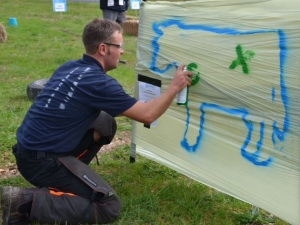 Douglas McGregor is the seventh grand finalist to be named in the 2015 ANZ Young Farmer Contest.

The thirty-year-old dairy farmer took first place at the Northern Regional Final in Dargaville on Saturday 18 April after a very tense and closely scored competition.

McGregor went home with a prize pack worth over $10,000 including cash, scholarships, and products and services.

This was McGregor's second attempt at regional final level of the ANZ Young Farmer Contest. He is a very active member of the Bay of Island Young Farmers Club and is the Northern Region vice-chairman. McGregor was competing against 26-year-old Anna Simpson, who doubles as the winner's partner.