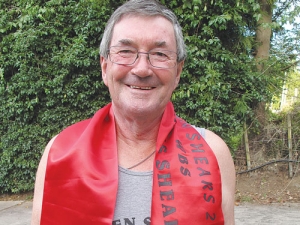 Shearing veteran Peter McCabe with the winner’s ribbon he won at this year’s Golden Shears.

For competitive shearers, winning a class at Golden Shears is a career pinnacle. Peter McCabe, Tauranga, achieved this at the 2015 event when he won the veterans’ class.

“I have been shearing for 45 years including competing in other classes at the open so the winner’s ribbon means much to me,” McCabe told Rural News.

He also judged various classes, but not the veterans, at this year’s finals, as the organisers gave him permission to compete in that class.

The veterans’ class has a minimum entry age of 65 years. McCabe is 66, and there were 18 competitors nationwide.

“I taught myself to shear at home and did my first hundred, shearing left handed before dad (45) and I (15) attended an Ivan Bowen shearing school in July 1967. Ivan convinced me I would do better shearing right-handed.”

McCabe said while it took him time to get used to it, it definitely was the right thing to do.

He then shore for 10 years with contractor Eddie Corbett, mainly in two-stand sheds working from home in Waikato. He married in 1970 and spent four years more with two other shearers working between Whangamata and Morrinsville, until numbers grew to enough work for each in his respective area.

McCabe then worked in Waikato in 2-3 stand sheds, building a reputation for quality work. About then he did his personal best – 408 sheep in eight hours.

He also started shearing at shows “where I did well”, competing from Whangarei to Masterton. There was little shearing during the Waikato winters so Mccabe did five years of pre-lamb shearing working out of Milton, Otago. He also worked the off-season in a local garage, becoming a competent mechanic.

“During the heyday of the boom in goats in the mid-1980’s I also had sheds shearing up to 750 Angora x goats and won several shows shearing goats.”

For shearing goats he used a 17 tooth comb and usually a slower cutting machine so the handpiece would not get so hot. Goat shearing was a class at Golden Shears for two years and he won the event in 1989 and was runner-up in 1990.

While working full time as a mechanic, McCabe still judges at many shows and competes in veteran shearing contests.

“These are run with time handicaps for age and when shearing five sheep I have to give other competitors up to a minute start.”

Some competitors are as old as 83 – they just love shearing, McCabe says.