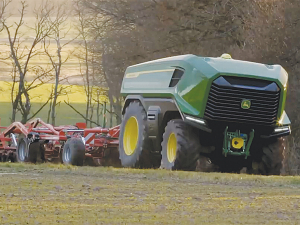 JD looks to be progressing with its fully electric, battery powered concept tractor – the SESAM 2.

An electric CVT with electro-mechanical power split, it is now available as an option on all three versions of the flagships; the 8R410, 8RT410 and 8RX410.

While JD claims the technology is a durable solution for its tractors putting out more than 400hp, the new transmission also won over the judges at Agritechnica 2019, where it won an innovation award gold medal.

The new transmission sees hydraulic components ditched for an electric power path, using two brushless electric motors that are said to be virtually wear-free. Benefits are said to include improved gearbox efficiency, reduced maintenance costs, lower in-cab sound levels, while the driver also benefits from fine speed control and improved acceleration. As speeds of up to 5km/h are now driven purely electrically, the changes of direction are said to be faster and smoother.

The other claimed benefits of the electro-mechanical EAutoPowr transmission and intelligent e8wd system are also said to include increased traction and significantly reduced wheel slip.

With the help of the E-Drive, the electric drive is activated to prevent any wheel slip from occurring, using slip limits that are pre-set by the operator. This allows the system to support the tractor permanently or only in certain situations, such as travelling uphill.

The electric driveline is also configured to provide up to 100kW of external electrical power via an E-port, offering a 480v variable-frequency three-phase AC supply for implements. Working with effluent tanker Joskin during the development stage, the duo demonstrated how this power can be put to good use, in the form of a slurry tanker with two electrically powered axles.

Still on the electrical theme, JD looks to be progressing with its fully electric, battery powered concept tractor.

The Sustainable Energy Supply for Agricultural Machinery, SESAM 2 tractor was first shown in 2017, based on a 6R chassis and fitted with a 130kWH battery pack mated to a modified Direct Drive transmission that offered up to 4 hours mixed work capacity.

Fast forward to 2022, the tractor takes on a new more robotic look. Power is provided by a 1,000kWh battery pack that can deliver 500kW to the powertrain and 1,000kW available to power implements. Range is said to be around 10 hours at an 80% battery load. With the battery housed along the full length of the chassis, rather than the conventional engine location as seen in SESAM 1, the total weight of the unit is now around 18 tonnes.

A further design change sees the additional of a new detachable cabin, mounted low and forward on the front linkage. This allows the machine to be moved manually between sites, then removed for autonomous use.

Interestingly, a recently released company video shows the cabin positioned in a paddock, offering the control technician one of the most prestigious workman’s huts in existence.