Handles humps and hollows with ease 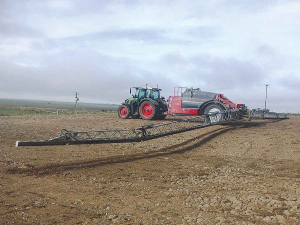 Operating on 36m tramlines, they also have undulating ground. So, the Turleys were the first in New Zealand to purchase a trailed Horsch Leeb GS sprayer with 6,000-litre capacity and 36m booms.

The machine is equipped with Horsch’s BoomControl Pro Plus, which allows each side of the boom to bend vertically, at a pivot point partway down its length, to offer impressive contour following.

Andrew Smith, farm manager at Turley Farms’ property at Orton, says the land there looks flat, but is old riverbed country and has plenty of dips and gullies.

“The Horsch Leeb auto control boom follows the contours better than anything else on the market.

“This is what attracted us to it.”

Smith says when working with their old sprayer there could be a height difference of 1.5m from one end to the other, creating a risk of the boom digging into the ground, or the opposite effect, more spray drift and uneven application.

“Weed control in the onions has improved and we spray a little less,” Smith says.

“We are now getting around 95% chemical contact in the crop as the boom is always the same height. We typically work at a 300mm boom height but have the option to work at up to 900mm if conditions demand.”

For 26 years, Turley Farms had run self-propelled units, so it was a big deal to get McConnochie to embrace the change to trailed. He says he is now working in conditions that would have stopped him in the previous sprayer.

“If there is a breeze and the boom is 1m above the crop, then you get drift. There are not many days we have to stop now, as the booms are that low – it just looks after itself.”

Running the Horsch Leeb at a speed of 12-16 km/h, the use of higher water rates and increased speeds means more hectares being covered in less time.

In operation, McConnochie enters in the spray rate and how many hectares to be covered, then the spray controller calculates how much water is required and pumps up that much, typically taking about 11 minutes to completely fill the tank.

If forward speed changes while spraying, the system adjusts the application rate to keep the total rate constant. Meanwhile, the operator can also change nozzles from the cab, rather than get out and do it manually.

The sprayer also features section control, so it delivers an even application rate without overlaps or skips.

Looking to the future, Turley Farms is considering a Horsch self-propelled model, probably fitted with Auto-Select, where the sprayer changes nozzles on-the-fly to meet required rates and changing ground speeds.