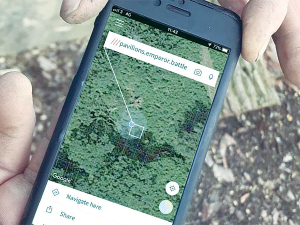 The What 3 Words app directs users to specific locations on a property.

Modern smartphones allow us to explore a world of applications (apps), many of which we download, use a couple of times, and then forget.

However, one useful app that is being used by an increasing number of rural people is the strangely named What 3 Words (W3W) for directing staff, visitors, contractors or even the emergency services to specific locations on a property.

It was developed by co-founder Chris Sheldrick, who had become increasingly frustrated by the inaccuracy of the UK postcode system -- especially in rural areas. The app has cleverly divided the entire planet into 3m x3m squares, with each given a unique three word reference that will never change.

With a mathematician friend, Sheldrick calculated that the English language offered enough three-word combinations to accurately reference the whole planet; with 40,000 words enough to cover the 57 trillion, 3m x 3m squares required to map the globe.

To use the service, users need to download the Apple or Android mobile phone app or to visit the W3W website. Once the three-word address has been obtained, it can be sent to anyone – whether they have downloaded the app or not – by opening the link and they will be taken to a map location.

To navigate to a W3W square using a smartphone, users just click on the location or type in the three-word address and select a navigation method, such as Google Maps, Apple Maps or a compass. The tool uses smartphones’ inbuilt GPS receivers, so in areas with no phone signal, it’s still capable of finding the user’s location.

However, a signal or some other form of communication (such as a CB radio) will be required to send the location to others.

Notable squares in New Zealand are craftily.obeys.rips; which is the home of NZ National Fieldays, floats.monks.nurses; finds The Beehive in Wellington and jumpy.vocab.mutual; which will guide you to The Cloud on Auckland’s  waterfront.

However, as the developer points out, the apps’ key benefit is to guide users to remote, anonymous locations – rather than well-known landmarks.

The system was launched in 2013 and has millions of users across the world. It has been translated into 36 languages and has even been adopted in Mongolia for its postal service.