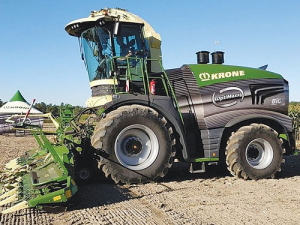 Much like the price of petrol, the power outputs of self-propelled forage harvesters continue to rise.

Take the German manufacturer Krone: although a late starter in the market it has carved itself a useful share and a loyal following. And its new four model range is likely to add a few more followers.

Similarly a standard 230L additive or water tank can be optioned to work with an additional 275L unit.

Following the harvester’s chopping cylinder, the heart of the machine is an 800mm wide crop flow system. Its new OptiMaxx corn cracker system, like previous designs, uses two heavy-duty chrome plated rollers that run with a standard speed differential of 30%. Dependent on the situation it can be configured for 40% or 50% options.

The new design sees a roller tooth profile inclined by 5 degrees to create a greater shearing effect. And it can achieve better shattering of the maize kernels. Roller dimensions are now 10% wider, 7% faster and use more aggressive spring settings for a more consistent output, particularly in tough conditions.

In the smaller machines, the roller diameters are 250mm; in the OptiMaxx unit, recommended for the Big X 1180, roller diameter is increased to 305mm – claimed to be the largest in the market. This increase in diameter is said to offer 11% more surface area and 20% more rotational speed at the circumference. These combine to allow processing of up to 400 tonnes/hour or 100kg/second. Roller bearings have been upgraded, fitted with an auto-lube system, and temperature sensors to alert operators to overheating.

Up front, the chopping cylinder has automatic shear bar setting utilising knock sensors, although manual setting is still included for sceptics of such witchcraft.

A further option is the VariLoc system that allows a quick shift from 1250 to 800 rpm cylinder speeds or vice versa. This is said to be useful for busy operators who might need to shift from forage to AD production during the same day, which only takes a few minutes.

Also aimed at maximising daily outputs is the option of EasyLoad, a 3-D image-based system for automated spout control, using a front-to-rear or rear-to-front filling sequence.

Krone's harvesting division achieved a turnover of €618 million for the 2017 market year, a rise of 7%, and an increased output of 25,000 machines.

Commenting on the global market for self-propelled forage harvesters, Krone estimates the total is 2800-3000 machines annually.

Meanwhile, at home the company claims to have sold 25% of the 500-520 machines delivered during the year.

About 70% of its production is exported, but its home market of Germany remains number-one, achieving 29% of turnover and a claim of 24% market share for all grassland equipment.