Local machinery dealership gets ready for the future 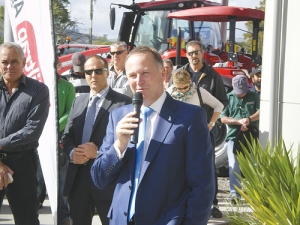 Since being awarded the Case IH franchise in 2009, Giltrap Agri-Zone has won an increasing share of the tractor market in the Waikato region.

Operating out of Otorohanga, Rotorua and Cambridge, the business generates a turnover of about $50 million and has a staff of 80 people.

The company recently relocated its Cambridge depot to a new site adjacent to the soon-to-be-opened Waikato expressway. It welcomed customers and guests to an opening ceremony with Prime Minister John Key officiating.

“While there is some negativity due to the low milk payout, there will always be a need for food production, particularly in Asia, where they are rapidly transitioning to a western style diet,” Key told the audience.  He also noted that investment in agriculture and its support industries will always be a wise move in the long term.

Andrew Giltrap, managing director of Giltrap Agri-Zone, says that while the $4 million investment may have seemed at odds with the current climate, “there was a need to relocate from an outgrown location and raise the business to the next level.”

The new premises will certainly do that, with modern workshops, large showrooms and dedicated parts and sales areas. This is complemented by covered storage and display areas for new tractors and machinery.
In welcoming the 1100 guests to the opening of the new premises, Giltrap says the company wanted to provide a “world class” location “where customers can come and discuss their requirements and staff can perform to the best of their potential.”

Healy told Rural News Case’s policy was to work with dealerships on an individual basis to help them to achieve their potential and ultimately to lift profitability.

“This is to ensure a long term presence in their areas and might mean there will be large ‘flagship’ depots in some areas, as opposed to smaller family-type units in others,” he explained.

When asked what had resulted in a recent 25% rise in the Australian market for tractors, when the rest of the economy was lacklustre, Healy commented: “Those five magic letters — W-A-T-E-R – which has fallen well in the main growing areas.”

He says farmers have resilience and look at the long term picture rather than short term blips.

Healy adds the challenge for CaseIH was to bring products to the market that delivered real benefits to the user – be it increased daily outputs or reduced fuel consumption.