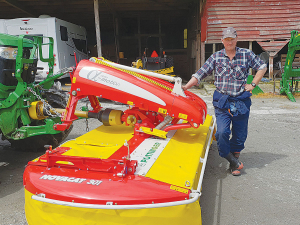 The arrival of a new Pottinger NovaCat Alpha Motion 301 front mower will reduce time mowing, a bonus given the changeable weather conditions in the region.

“I chose it for its good reputation and price,” he says. “And the machine has been faultless, bulletproof and easy to put on and take off the tractor.”

Because of the performance of the rear mower, Wyatt added a NovaCat Alpha Motion 301 front mower, taking delivery in October and having it installed by the dealer.

He says it’s “really quick” and easy to use. “I knocked over 20 acres in two hours yesterday without pushing too hard,” he said.

“A tractor and rear mower would take me nearer six hours to get 20 acres done. With this being our first front-mower we are amazed at how well it travels. Output is huge with no blockages, even in a very thick crop.”

The NovaCat Alpha Motion 301 has 3m working width and can mow up to 3ha/hour. Its suspension has 500mm of vertical travel and inclination angles of 12 degrees upwards and 9 degrees downwards to prevent the cutter bar from damaging the sward.

The design allows the guide arms to respond actively to changes in terrain and to the mounting frame itself, resulting in the cutter bar tilting upwards over bumps and downwards into hollows.

A rounded, low profile front edge lets the cutter bar move smoothly over the ground and separate the crop from the sward. At the same time, the mower uses the rounded conical surfaces of the mower discs to let the crop flow smoothly and uniformly, for maximum capacity regardless of conditions.

Pottinger is launching a 3.0 m version of its cross-flow auger.