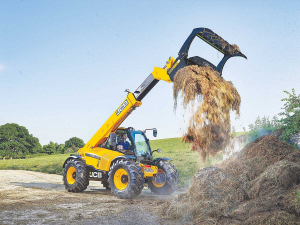 JCB will be on show at the South Island Agricultural Field Days.

JCB and Amazone will be on show at the CLAAS Harvest Centre display at the South Island Agricultural Field Days.

“Making it easier for operators to switch from one type of JCB machine to another,” he says.

A seat-mounted joystick and control pod configuration is standard in the Agri Torque Lock4, Agri Super and Agri Pro, while overall the cab is 12% larger and 50% quieter than the previous model.

The Auto Smoothride System engages at speeds over 4km/h, improving load retention and comfort when travelling at speed. Meanwhile, its boom end damping system improves material retention and makes for a smoother work cycle. The high-capacity hydraulic system delivers a flow rate of 140 L/minute for rapid boom operation with hydraulic auxiliary venting activated in-cab or at the headstock for quick and safe attachment changeover.

On the machinery front, AMAZONE Ceus combines a compact disc harrow with a tined cultivator for performance and versatility in all operating conditions.

Available in four working widths from four to seven metres, the new series can perform several processes in a single pass at operating speeds of up to 15 km/h. Nehoff, says the new Ceus series is a true ‘all-in-one’ cultivator.

“Ceus is ideal for farms that need to cultivate at a range of depths, incorporate stubble and prepare seedbeds with just one implement,” he says.

“The front disc section intensively cuts, mixes and incorporates crop residues, as well as creating a finely crumbled soil profile from 5cm to 14cm. The tine section then loosens the deeper soil layers down to 30cm, while importantly, both sections can be adjusted independently.”

The disc section can be raised out of work completely – even with the tines at maximum working depth – reducing pulling power and saving fuel.

Likewise, the tine section can be raised out of work to allow shallow stubble cultivation or set to run just beneath the working depth of the disc harrow when working in heavy conditions.

Individually suspended 510mm serrated discs with the shanks are mounted to the frame via solid rubber mountings. A 17-degree profile and 12.5cm stagger on the front row of discs and 14-degree profile on the rear row is said to produce a perfect cutting and tilling action.

The working depth of the front disc segment is adjusted using the parallelogram guidance, while the penetration intensity can be changed by twisting the disc segment. During operation, the penetration force of the tined section increases the cutting effect of the front discs, helping to achieve the optimum pre-conditions for straw decomposition, germination and crop emergence.

The C-Mix Super tines, set on a 40cm spacing, have a 600kg release force for stone protection, with both the disc and tine sections are followed by a levelling system comprising either smooth or serrated discs or spring tines and a choice of 10 different rollers to suit different operating conditions and soil types.

Better border control - without a passport!

Cultivation, seeding and fertiliser application specialists Amazone, claims its new AutoTS spreading system can increase yields along the borders of the paddock by up to 17%.

Cultivation, seeding and fertiliser application specialist Amazone claims its new AutoTS spreading system can increase yields along the borders of the paddock by up to 17%.

After celebrating its 70th year last month, it looks like the South Island Agricultural Field Days (SIAFD) has hit its heights - with most exhibitors spoken to considering it to now be the 'best' field day of any sort in the country.

The machinery demonstrations are a major part of the biennial South Island Agricultural Field Days.