A lifetime dedicated to lupin research 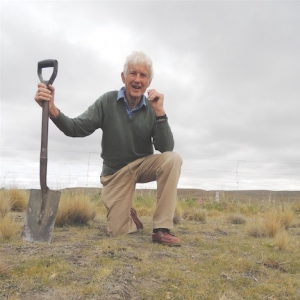 Research on lupin in New Zealand is dominated by one man’s work: Tekapo resident and former Agresearch scientist David Scott.

His relationship with the colourful legume spans eight decades, starting when his mother, among others, spread seed along a roadside in the Mackenzie Basin in the 1940s.

“I was just going back to boarding school. It can’t have been more than a few hundred yards because we were walking,” he recalls.

The roads were all shingle in those days and over the years graders spread the species across the basin. Meanwhile Scott studied botany at university and, after a couple of years farming and doing a PhD in the US, he went into research with the Department of Agriculture and Grassland where he was asked to take on the high country programme.

A problem with pasture and crop trials at the time was that they were never big enough to incorporate grazing animals, he says, so in 1981 a site was established at the foot of Mt John with “twenty-seven species sown in one glorious mix with different fertility levels and grazing management applied.”

He says it was “purely by chance” lupin was included but now “the rest is history” as over the years the crop came to dominate the low and medium fertility plots which had 50 or 100kg/ha/year of superphosphate (ie P and sulphur) applied. With grasses between the lupins benefitting from nitrogen fixed, average stock carrying capacity was more than trebled, from 0.8 stock units/ha/year to 2.6-3.1 stock units/ha/year*.

Meanwhile the high fertility (500kg/ha/year super) plots which were also irrigated became dominated by grasses and increased mean carrying capacity ten-fold, but the considerable cost of such inputs meant the low input lupin approach is likely the most economic, particularly as subsequent research shows that once established, about 50kg/ha of elemental sulphur applied every five years is all that’s needed to maintain productivity of lupin dominated stands.

“Once established it has it’s own means of getting phosphate.”

Asked why the crop is only now starting to gain traction with farmers in the high country, Scott says it is normal for a new crop to take years, if not decades, for farmers to become convinced of its benefits. He believes it could transform productivity off not only New Zealand’s low fertility pastoral land, but worldwide.

It seems likely swathes of the South Island’s high country will become a whole lot more colourful in years to come.