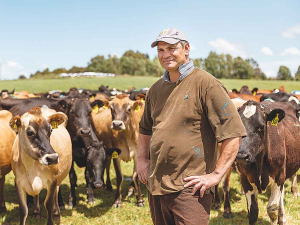 “I have no breed preference,” Lyn Baggott says. “As long as they are performing, pulling their weight.

“I like cows to produce their liveweight in milk solids, so it’s not a breed thing, it’s the performance of each individual animal.”

Lyn’s parents moved to Cust from Ruawai 20 years ago. The herd, made up of Jersey, Ayrshire, crossbreds and Friesian, was originally all Ayrshire. The move south meant his parents had to build up cow numbers so they purchased Friesians and crossbreds – all New Zealand genetics.

“I hadn’t been happy with the BW system as we’d been getting cows with poor udders and feet and lots of lameness. When I first bought the herd off my parents I did a simple on-farm exercise where I tagged each cow in order of BW. [For example] the cow with the highest BW received the lowest available herd tag. Within a few years I knew that BW wasn’t reflecting the best performing cows in the herd.

“After three or four lactations low ear tag number cows (high BW) were not necessarily the best performing cows in the herd.  I felt I was chasing rainbows when selecting on BW - it was always moving and changing. I wanted something better,” Lyn said.

He decided to focus on important traits like udders, legs, feet, temperament, fertility and, of course, production.

Lameness is an issue on the farm due to walking distance and track surface.

“Changing the source of genetics to overseas enabled me to select from the largest sire line-up in the world and since 2016 I’ve predominantly used World Wide Sires.

“One of the drivers for going to World Wide Sires was to improve the strength of the Jerseys. I like the mix of breeds in the herd but the Jerseys were, in comparison to the crossbreds and Friesians, weak and frail. They needed to be able to hold their own in the herd and I wanted genetics which would add stature and strength to the Jerseys.

“As soon as the first World Wide Sires’ Jersey calves hit the ground I could see they were more robust and strong than what I’d had before. They grow on well and now more than hold their own with the other breeds.

“Across the herd my heifers come in with good udders which only improve as they move on in the herd.

“We’re consistently getting nice udders which sit well between their back legs and don’t impede walking.

“I’m getting the animal I want in the herd and am not worried about their BW. I keep good herd records which show the production I achieve and that speaks louder than anything.”

Record them right in autumn rush

Sharemilkers are the minority among dairy and beef farmers, but in respect of NAIT they have a big role.

If problems now facing sharemilkers aren’t sorted out soon others will be put off entering the dairy industry, says an agribusiness consultant.