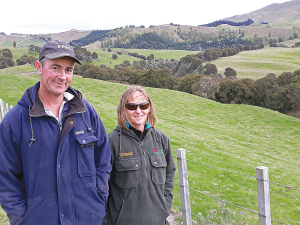 The Potters were praised by the award judges for their work in enhancing the environmental performance of their property.

They have owned the 640ha Waipapa Station for 20 years.

A bush clad gully on their Elsthorpe farm is a highly visible and attractive aspect of the Potters’ contribution.

This was placed into a QEII covenant with support from the QEII Trust and Hawke’s Bay Regional Council.

The Potters were also commended for their carefully planned nutrient management, waterway protection and other work.

Extensive use of willows and poplars has helped prevent soil erosion and they have carefully identified critical source areas in an effort to protect water quality.

The judges said acquiring a thorough knowledge of soils on the property had helped the Potters develop an excellent fit of stock class to land.

The Potters also won the NZ Landcare Trust Award for excellence in sustainable deer farming through action on the ground.

The Falconers have a wide range of deer based business streams including venison and velvet production, trophy hunting and genetics. In particular the award judges commended their efforts to manage water quality and quantity in Central Otago’s low-rainfall environment.

They were also praised for their extensive pest control work, protecting biodiversity and the business.

Adam and Sharon Waite, who manage the intensive finishing farm Northbank Station, near Dunsandel in Canterbury, also won two awards: the Firstlight Foods Award for commitment to farming sustainably with a strong customer focus, and the NZ Deer Farmers’ Association Next Generation Award for outstanding performance in environmental, financial and social aspects of the business.

The Waites have managed an extensive redevelopment on the property including more water efficient irrigation systems, improved pasture covers and new native shelterbelts and other plantings to provide shade.

The judges commended the Waites for their extensive documentation and recording using the FarmIQ system.

Award entrants the Kinzett family, who farm for velvet production near Murchison, were acknowledged for their work in fencing and shelterbelts, providing shade and shelter and screening stock classes to prevent deer from fence pacing.

Convenor of judges Janet Gregory, of NZ Landcare Trust, said all five properties entered for the awards were well managed farms of a high standard. She commended all the entrants for their work to improve environmental outcomes.

The biennial Deer Farmers’ Environmental Awards were instigated by the late Sir Peter Elworthy. The inaugural awards made in 2001.