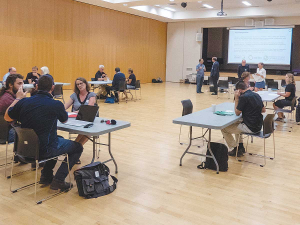 Researchers Tommy Ley, far left, and Steve Breneger explain their project during the “speed dating” segment of an innovative event at Lincoln in which scientists presented updates into several research projects then had a series of face-to-face chats with journalists and others attending the event. Photo: Rural News Group.

The farm applied 42% less nitrogen last season compared with the previous season, while both grass and milk production remained comparable with past seasons, according to research by Lincoln University masters student Tommy Ley and Irrigation NZ’s technical manager Steve Breneger.

Pāmu installed the fertigation system on the farm in November 2018. Ley and Breneger are conducting a study into its effectiveness.

Grass production is similar and milk production up on previous years, said Breneger.

“The numbers are still stacking up that it’s actually being quite a positive move.”

The pair’s research is funded by the Sustainable Farming Futures Fund, with support from Ballance Agri-Nutrients, Fertigation Systems and Molloy Ag. They spoke at an innovative “The Secret’s In The Soil” presentation day at Lincoln, where nine different teams all presented updates into various research projects on the theme of irrigation’s effects on soil.

Ley and Breneger’s study aims to determine whether fertigation improves yield, nitrogen use efficiency and clover content in perennial ryegrass/white clover pastures, and whether it has lower nitrogen losses, compared with conventional fertiliser.

Their study included two experiments at two different sites using fixed amounts of fertiliser, as well as the farm-scale trial at Pāmu.

Ley said fertigation allowed farmers to apply fertiliser when it was needed, in a liquid form, and more frequently.

“It essentially means you can maintain lower constant nitrogen in the soil. Therefore you’re going to reduce the amount of total nitrogen losses you can possibly get from the pasture.”

Fertigation was commonly used in horticulture systems, but there was a lack of literature into its use in pasture, he said.

Breneger said that like all the big corporates, Pāmu was looking at how to achieve the reductions in N-leaching they have to make over the next few years.

Installing their fertigation system was more about tailoring it to be sustainable, not just increase yield or milk, he said.

The system chosen by Pāmu uses a 30,000 litre nurse tank near the shed, and then a 5,000l trailer which is towed to the base of each pivot as required.