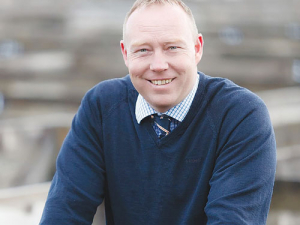 Farmers are reported to have joined a Red Meat Profit Partnership (RMPP) Action Group at Rangiwahia to upskill the people in their businesses and boost their profitability.

Eight farm businesses in northern Manawatu have joined the RMPP Action Network to learn from each other and various experts.

Murray Curtis, who hosted the action group’s third meeting, welcomes the opportunity to “be part of a group that gets you thinking and gives you ideas you can put into action on your farm”.

He says the size of the Rangiwahia Action Group is paying dividends.

“It is not too big and everyone who is a member knows everyone else. The members of the group are all comfortable speaking about their farm businesses.”

Murray’s wife Fiona Curtis is confident the learnings from the action group will mean the couple’s farm business is well-placed for the years ahead.

“Nothing extra is yet in the bank, but it will give us skills for the future,” she says.

Rabobank’s Byron Taylor helped connect people and get the group together initially.

“I found people keen to be involved and helped steer them towards the group. I can see already that farmers are benefiting from the new ideas.”

Taylor knows of other action groups nearby – two in Taihape, one in Ohakune and one in Hawera.

“Farmers are talking about the gaps in their knowledge and talking to other members and using experts to help fill those.”

Each farming business gets $4000 kick-start funding, pooled for the group to pay for a facilitator and expert advice. In year two, each farm business pays $800 of their own money into the pool to help keep things running.

Taylor says any decision is made by the farmer members of each action group.

“The group itself decides which direction it wants to go in -- a direction that they think might be profitable.”

The Rangiwahia Action Group has so far discussed feed budgets, how crops and pasture were growing through winter, and stock details on scanning rates, docking percentages and weaning weights.

Farm systems scientist Tom Fraser, one of the guests at the action group, talked to farmers about sheep performance.

“Most people are happy with their scanning data, but not so pleased about docking percentages and weaning weights,” he says.

“However, the idea is how best to use that data. It is no good collecting it if you don’t use it.”

Facilitator Sarah Bell says with eight farm businesses in the Rangiwahia Action Group, there is a high level of trust.

“With each business contributing in the second year, it also means they have skin in the game.

“It changes the level of commitment.”

RMPP works with farmers and sector businesses to develop, test and introduce new ways of engaging with information and technology.