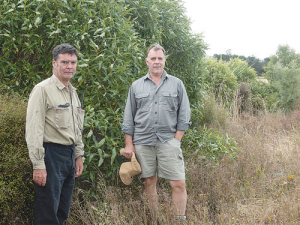 Mid-Canterbury farmer John Evans is reaping the benefits of native plantings on his farm, in the form of improved pollination and pest control.

“I can’t put a number on it, but I am spending less time and less money on spraying for aphids,” he says.

Evans farms at Dorie, near the coast just south of the Rakaia River, and has five areas devoted to native plantings, established with the help of Tai Tapu native plant nurseryman Steve Brailsford.

Brailsford says they were chosen for being native to the Canterbury Plains in pre-European times, known to harbour insects beneficial for pollination and predator control, and known not to harbour known pests.

The plants needed work in the early years but are now well-established and largely self-regenerating.

Evans, who acknowledges the work of his partner Kai Tegels in the early upkeep, said the only downside is maintenance, but this is far outweighed by the value.

Last year, Evans did not spray a 70ha wheat crop for aphids, yet there was no sign of the aphid-spread virus BYDV.

He said this year’s Chinese cabbage crop was “just humming” with beneficial native hoverflies and lacewings.

Brailsford described the lacewing as the “vampire of the insect world” for its voracious appetite for pests such as aphids.

The planting was begun in July 2013 as part of a Better Biodiversity project run by Plant and Food scientists Dr Melanie Davidson and Dr Brad Howlett, with the Foundation for Arable Research and with Sustainable Farming Fund support.

Brailsford says while only a few farms joined the Better Biodiversity project, he recommends essentially the same mix of native species to all his Canterbury clients.

“We’re planting about 70,000 plants across Canterbury each season. So we’re incorporating this type of thing into all of our agricultural shelter plantings,” said Brailsford. “You can’t plant a native without having multiple biodiversity benefits.

“Our two main pasture pests -- porina and grass grub -- are actually natives. A whole bunch of native insects will [prey on] them if we provide the habitat for the insects – the native shrubs -- for them to live their lifecycle on,” said Brailsford.

Evans, who chairs the LandWISE group (supporting onfarm R&D mostly in vegetable and arable cropping), said he was attracted to the project initially because of his interest in integrated pest management.

Both men also emphasise the aesthetic value of native plantings, and how they could attract native birdlife. Evans believes that just a few more islands of native plantings across the district would be enough to bring bellbirds back to the plains from Banks Peninsula.

“You know [farmers] get a kick out of going down to shift the cows and seeing fantails all in the shelterbelts,” Brailsford told Rural News.

Evans said it is a good way to use areas such as irrigation pond berms that were otherwise wasted, unproductive or difficult to manage. “Some might run their rams on it but then they fall in.”