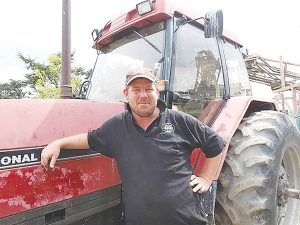 According to the Specialty Grains & Pulses Report produced by an Our Land and Water National Science Challenge research programme, Next Generation Systems, locally grown grains and pulses like soy, chickpeas and quinoa are being explored by local researchers and growers.

In the report, researchers looked at the opportunities presented by new and different plant crops in the grain and pulses families. From a long list of 22 possible grains and pulses, the research team narrowed their focus down to six ‘star’ crops they think have the most potential for New Zealand farmers. These are soy, hemp, chickpeas, oats, buckwheat and quinoa.

Sixth-generation Canterbury plains farmer Earl Worsfold, whose family grows wheat and barley near Darfield, says there’s potential in growing specialty grains and pulses. Worsfold says, while he hasn’t yet put his toe in the water with these crops, he’s keen to look at them.

“We’re always looking at different options. Our farm area is 400ha, of which 200ha is in cereals. We could quite easily replace wheat with oats or one of these other grains, because we’re growing in a pretty diverse rotation. We could easily drop a paddock of wheat out and put a paddock of quinoa in.”

The specialty grains and pulses research team, led by Susan Goodfellow at Leftfield Innovation, began by inviting farmers to a workshop to identify their needs. The farmers wanted help identifying sustainable land use options that ticked three boxes: they had to fit within their current farm system, have potential to scale, and a validated market. Building on earlier research undertaken by Leftfield, speciality grains and pulses were identified as an opportunity with potential to meet these requirements.

The research team gathered information on a wide range of crops and then applied six ‘filters’ to assess them. This started with consumer insights to assess demand, identifying a range from food manufacturers who value local ingredients as part of their own brand stories, to a growing group of conscious consumers, who are prepared to pay more for foods that are sustainably grown in New Zealand.

The researchers then looked at the grains and pulses we import now, and asked, is there an opportunity to replace these with New Zealand-grown alternatives? They also looked at the risks to both biosecurity and food safety posed by importing these grains and pulses, the existing processing capability and knowledge, and environmental impact.

Goodfellow says the way these crops fit into future farms could be as part of sustainable, mixed farming systems that also include some animals.

Worsfold, who is a member of Leftfield’s Future Grains Growers Group, cites buckwheat as an example of a crop that could fit well into a mixed system, being planted in November and harvested in March or April.

“It could fit following a rye grass seed crop, where you’ve had the grass for grazing stock all winter, and then you take it out in November and put it into buckwheat. Then take that through to April and you could put it into wheat. That’s where those sorts of crops fit in quite neatly.”

Since the report was released, Leftfield Innovation has been working on next steps with its growers, including a trial growing buckwheat in Canterbury for the Japanese market, trials with GE-free soybeans and trials and attribute testing of chickpeas. A similar project to identify opportunities for farmers in the Wairarapa is starting this year.