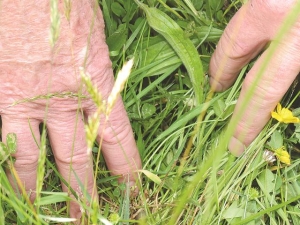 IMAGINE LOOKING across the farm and being pleased to see hundreds of creatures vomiting and dying of dehydration.
Sounds surreal, but it's becoming reality thanks to smart scientists working on porina caterpillar control.

Mark Hurst, AgResearch Lincoln, and his Invermay colleague Colin Ferguson, have, for several years, been working with bacteria Yersina entomophaga MH96, a bug Hurst discovered in native grass grubs in 1996. It's since been found to be deadly to porina and other insect pests such as bronze beetle and diamond back moth.

Ferguson's laboratory and field trials have taken it close to commercialisation as a biocontrol.
"Porina have to ingest the bacteria, which produces a range of toxins which strip the lining of the insect's gut causing it to die fairly rapidly through a combination of vomiting and dehydration. Basically it can't keep moisture in its body and, based on results of laboratory trials, the porina die within 72 hours," he told Rural News.

The traditional approach to get porina to eat the bacteria is to spray it on pasture. "Another way we can do it is to develop a bait which the porina will find attractive and feed on."

Bait formulation with a biopolymer gel makes the yersina last longer than when sprayed on. Results with a product in development are promising. If commercialised, it would be a more 'natural' control as while yersina affects some other soil insects, it does not affect the range of soil biota organophosphate sprays do.

However, yersinia won't persist in soil or reproduce naturally so its use will be more like a chemical insecticide than some biocontrols, he adds.
"Realistically it will be a couple of years before we go to market. It really just depends on how much Mark and the team at Lincoln can improve the formulation."

Typically populations are several porina species, possibly as many as ten. While farmers don't necessarily need to know the different species they do need to know about flight times, he says.

"What is important is that different species fly at different times of the year, and the time of the year that they fly and lay eggs determines when the caterpillars are feeding most voraciously and when the damage they cause is going to show.

"It also determines when control measures can most effectively, and profitably, be implemented. For instance, we had big flights in Otago and Southland recently. The damage from caterpillars that arise from eggs laid during those flights will start to show in April but the caterpillars can be controlled as early as January."

Mass spring moth flights are experienced nationwide, with a trickle of flights through summer. A second mass flight in the South Island can occur mid to late January but in the North Island late February is more likely.

"Generally farmers treat porina from both flights much too late: 8 to 10 weeks after the flights occur that's when farmers should treat."

Porina's relationship with a range of naturally occurring viruses in soil is also key. The viruses are natural regulators of the pest and if associations are disrupted or destroyed, populations can spike, he explains.

"The most common problems are linked to cultivation. As soon as we cultivate we destroy any porina which might be in the soil, but because there are no porina in the soil the viruses can't survive and they die out as well. In response the population of porina will build up over the next couple of years more quickly than the viruses and then, usually 3 years after cultivation, there'll be outbreak of porina. The following year the virus will catch up things will settle down a little bit."

A hot summer or drought can similarly disrupt things as egg and larval survival is poor.
"The difference here is that with cultivation you are looking at young pasture that's going to get hit, whereas with drought it's the whole farm, and the damage can cover an entire district."