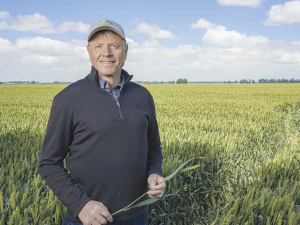 Conditions often aren’t in his favour, but precision technology is helping to even the odds.

Getting to grips with highly variable weather and soil quality is a constant challenge on Craige Mackenzie’s cropping and dairy farm, near Methven, in Mid-Canterbury.

However, precision technology is proving a powerful ally.

After mapping his soils and crunching the numbers, Mackenzie discovered that potential yields varied significantly across his farm. He realised that he was overdoing the inputs in places, which wasn’t good for the bottom line or the environment. The numbers revealed he was losing money in some areas.

It became clear to Mackenzie that optimising outputs across the farm would mean growing different crops in different places and applying different amounts of fertiliser and water at different times—on both the cropping and dairying sides of the operation.

“Getting that base right was important,” he says.

Then Mackenzie started looking at variability through the growing season as well – and that’s where precision technology has really come into its own.

Using data from soil maps, spatial soil sampling, yield analyses and nitrogen scanners, Mackenzie can calculate exactly how much fertiliser is needed in different areas of the farm. He uses rainfall data, soil moisture probes and evapotranspiration sensors to work out where water is needed and where it isn’t.

He also consults high-resolution weather forecasts to see if nature is likely to deliver that water in the right dose at the right time – or if irrigation is needed. GPS-driven variable-rate irrigators, sprayers and fertiliser applicators are then put to work, delivering precise doses exactly where they’re needed.

The results speak for themselves.

In 2015, Mackenzie’s cropping programme used 95 tonnes of urea. However, in 2019 it only used 77 tonnes. Some of this reduction resulted from a different mix of crops.

But a lot was due to his use of technology and spatially targeted application with variable-rate fertiliser spreaders. In addition, in 2020, Mackenzie has exclusively used N Protect, which is coated with a urease inhibitor to reduce any possible volatilisation to the atmosphere. All nitrogen is applied in front of either a rainfall event or an irrigator to increase efficiency.

Water use is also down by half during some seasons, when compared with similar seasons in the past.

Mackenzie admits that the high-tech approach might not work everywhere. However, he believes his careful investments made in precision technology have all paid off within 12-24 months.

“Sustainability needs to be built into our businesses, not bolted on.”

Sourced from the AgMatters website, which is funded by the Ministry for Primary Industries and managed by the New Zealand Agricultural Greenhouse Gas Research Centre (NZAGRC).