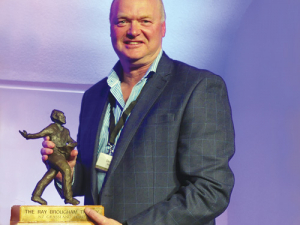 The conference, held on Nov 2-4 in Timaru, attracted just over 300 delegates from across the country, including many leading scientists. Papers presented covered crops from fescue to fodder beet and lupins to lucerne.

Those field days included two robotic dairy farms and a dryland finishing property on the first day of the conference, followed by a progressive dryland sheep and beef property and an irrigated finishing farm on day two.

The field days helped scientists see previous research being put into practice and hear what challenges local farmers face that might merit research. The morning sessions relayed the latest findings.

“What we are here for is science and that’s what we endorse,” said Stevens in his closing comments to the conference. “The association does not endorse products, processes or cultivars. We are here for debate and we welcome that.”

Increasingly pastoral research is being done, or at least controlled, by commercial entities, so Stevens encouraged these to submit their work to the independent peer-review process the NZGA provides. If it proves scientifically sound it will make it into the conference programme and the associated journal, he said.

“It’s a really important part of our future…. A lot of the pastoral sector’s science is now conducted outside our formal institutions and we welcome our industry partners putting that science up here at the conference.”

Moot had been instrumental in the economic, social and environmental transformation of pastoral farms in the dry east thanks to his outstanding research and communication skills, said Grasslanz’ John Caradus.

The farmer awards went to dairy farmers Alvin and Judith Reid, whose robotic dairy farm at Pleasant Point was among the field day stops, and sheep and beef farmers Warren and Andrea Leslie.

“It would be fair to say her influence has helped many farms in the region raise their productivity substantially over nearly two decades,” said Caradus.